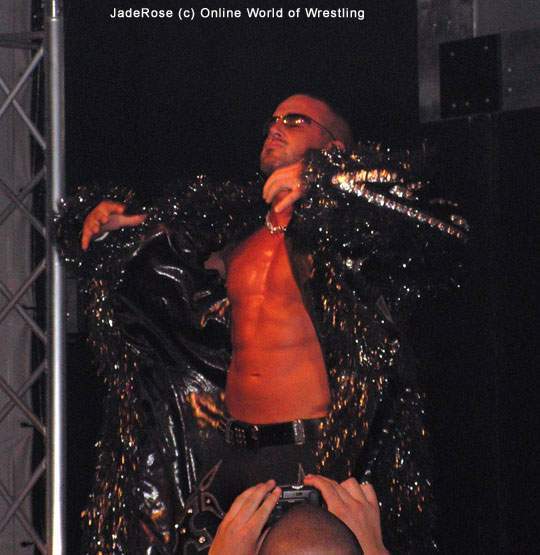 From the sounds of Shovelhook to the arrivals of PWU superstars on the red carpet, PWU fans got to be up close & personal the likes of “Living Legend” Larry Winters, Justice Pain, Nikolai Volkoff, Gangrel, Sunny, Diamond Dallas Page, PWU Heavyweight champion Too Cold Scorpio (arriving on Jet Skis with The Bosom Buddies), and more of the PWU superstars and their unique arrivals, including Team PIT in convertible Corvettes, Eddie Kingston inÂ  a custom car from Eargasm, & even Detox on a scooter!

As fans entered the building, they were warmed up by the sounds of Survival Rate Zero.

An overconfident Lucky, who pulled off a victory against Detox in their last match was ready to shut him out again.Â  But this time, Detox has a goal in mind – 10 lbs. of gold around his waist in the form of the PWU TV Title.Â  Action packed from the beginning, Detox caught the NJ superstar with a pump handle STO after Lucky attempted to fake an injury.

One NJ Independent Superstar suffering a loss, JC Ryder wanted to stop Team PIT member Aramis from making it 0-2…but got sidetracked at first, telling the crowd Annie Social was the most beautiful girl he had ever seen.Â  Aramis took exception to the comments and took a powerful control over JC Ryder the whole match, finally connecting with a Brainbuster to get the 1-2-3.

With the ink barely dry on his contract, Justice Pain pulled off a victory against the legendary Gangrel using every tactic on the book to keep Gangrel off guard.Â  But as Gangrel seemed to have the upperhand, Pain reversed the momentum and hit the Pain Thriller for the victory.

The petite Lexx attempted to out maneuver the PWU Women’s champion, but Amy Lee showed she can trade holds with the best of them.Â  But Amy Lee’s power shone through and despite some “playful” assistance from referee Annie Social, Lexx got caught and tapped out to the Gory Stretch.Â  But before leaving, Amy Lee told Annie Social that she’s beaten her before in under 20 seconds and next month if she can’t do it again, she’ll give up the PWU Women’s Title.

After House reminded the crowd to catch him on the new PWP Live on Friday nights at 10 pm, he demanded everyone stand for a “real” TV star, the number 1 contender to the PWU Title, Joey Matthews.Â  Matthews said he’s not worried about facing Scorpio as he brought his own security force, Dan “The Beast” Severn.

Z-Barr, in pre match commentary, promised some Sunny skies ahead and once in the ring through the resounding boos that filled the Arena, he introduced his new manager, “The Original Diva” Sunny.Â  But John McChesney showed how little he was impressed and took early control, even splashing Barr from the top rope on the floor.Â  But Sunny turned the tide, stopped the count after McChesney’s frog splash, allowing Z-Barr to hit his world famous Brainbuster to advance in the TV Title Tournament.

* PWU #1 Tag Title Contenders Match: The Best Around def. The Iron Saints and All Money Is Legal

Brandon Thomaselli riled up the crowd by getting them to insult Adam Flash by asking him “Who are you?” and “What’s your name?”Â  Thomaselli started by blindsiding Flash and took the early control, until Flash capitalized and clotheslined the boots off of Thomaselli.Â  But as Flash later tried to go to the top, Thomaselli crotched him and connected with a Superplex.Â  After a powerful double underhook lungblower, Thomaselli his “The Deal” and advanced in the TV Title Tournament.

Upon Diamond Dallas Page’s arrival to a chorus of “DDP”, he said he was there to put the Commissioner Idol contestants through the ringer.Â  The Commissioner Idol finalists each had 30 seconds to give their best, most “DDP-like” motivational speech.Â  Each contestant (Dexter, Joanna, RC, The Kliq, The White Board Mafia, Loud Fan, Chris Cavanaugh, The Joker, Stephanie, and Ravenheart) did their best, but their’s only one DDP.Â  You can vote for your PWU Commissioner at ProWrestlingUnplugged.com

Hawx tried to start off with a vicious onslaught, shrugged off by Kingston who capitalized by trying to knock Hawx’s head off.Â  Hawx tried to take advantage after catching Kingston with a lucky neckbreaker, but got crotched on the top rope, allowing Kingston to continue the assault with powerful kicks and suplexes.Â  When Hawx countered a backdrop driver, Kingston ducked a spinkick attempt, and delivered a crushing spinning backfist for the win & to advance in the PWU TV Title Tournament.

Both men tried to destroy each other – Trent to beat Devon down for his assault on Too Cold Scorpio last month and Devon to show he’ll do anything regain the PWU World Heavyweight Title.Â  Powerful action that went back and forth and spilled to the outside, these two kept a strong flurry of action.Â  But Devon pulled referee Mike Kehner in between him & Acid, knocking the ref out.Â  Acid connects with the Yakuza Kick, but there’s no referee.Â  Moore slid on a pair of brass knuckles to lay out Acid cold, but to play more mind games, put the knux in Acid’s shorts & drug Trent’s Arm over himself for the 1-2-3, just to point out to Kehner that Acid “cheated”, which caused a reverse decision.

The SAT started their assault early by slinking through the crowd to assault The Bosom Buddies.Â  The champions kept on the attack with double teaming tactics until Drew Blood came in to clean house.Â  But after the champs regained control, Blood made the save by holding down Teddy Fine’s feet to stop him from being hit with the Spanish Fly.Â  But when the ref’s back was turned, Joel hit Drew with a cheapshot for the win.

Joey Matthews started confident that with his new security Dan “The Beast” Severn, he would champion by the end of the night.Â  But it was Scorpio who got the support of the fans, standing on their feet for his arrival.Â  A tremendous high impact match between the two, it broke into chaos after Matthews sidestepped a dropkick from Scorpio which instead hit referee John Finnegan.Â  Dan Severn slides in the ring & began to beat down & choke out the champion, only to be stopped by Diamond Dallas Page, who Diamond Cuttered Severn and Matthews.Â  But Devon Moore made his way to the ring, cleared the ring of DDP & then began to try to stomp through Scorpio’s rib cage.Â  But when all hope was lost, the light went off in the Arena and as they came back on, Devon Moore was so flipped out, he ran out of the ring as fast as he could and away FROM THE SANDMAN!Â  After clearing the ring, Scorpio, DDP & Sandman stood with their arms raised & Sandman saying, “Damn it feels good to be home!”
Watch Power Surge TV; Join the PWU FamilyÂ
Become an Ad Sponsor & Be Seen on Philadelphia TV

Have a business? Interested in being an advertising sponsor & featured on Philly TV?
Download ProWrestlingUnplugged.com/Partner1.doc to apply and send it to [email protected].
Power Surge TV invades Comcast Philadelphia on Channel 66 & Comcast Main Line/Lower Marion on Channel 98 on Wednesdays at 8 pm starting September 19 (Just 4 days after the 3rd Anniversary!).
PSTV will simulcast on ProWrestlingUnplugged.com FREE for viewing all week.Â  Check out the PSTV sub-site for the latest & to find YOUR zip code for airing.
Â

—————————————
Gangrel Seminar on October 27Â
Learn from one of the most experienced professionals there is in wrestling.Â  The world wide superstar GANGREL will run a wrestling seminar on Saturday, October 27 at 3 pm for the cost of $25 sponsored by The XFC.
Â
To RSVP, e-mail [email protected].Â