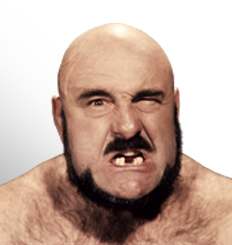 Recap of  the Maurice “Mad Dog” Vachon tribute on In Your Head Wrestling Radio, dated November 27, 2013
by Vic Schiavone

Hosts Jack E. Jones and One Inch Biceps paid tribute to the late Maurice “Mad Dog” Vachon, who passed away on November 21, 2013. Several associates of the Mad Dog shared their memories of working with him.

“Our tag team clicked immediately…the people would go crazy. And usually, the Mad Dog loved heat; so he kept letting it build and letting it build and letting it build. And I didn’t know any better, so I kept helping him build it and build it. For three months during the summer, the first summer I was there, we had a riot every night wherever we were. The matches always ended in a riot; we had to fight our way out of the ring. We even had a cage match…and they put up the cage and the babyfaces got in the cage. We started to come toward the ring, and before we got to the ring the people got so excited they tore the cage down…We had a lot of heat in that territory.”

“He was mad and terrific…I would put him right up at the top. He was a heck of a wrestler; a heck of a guy…he was a tough cookie…He had strength, he had knowledge, he had conditioning; he was there for the fight.”

“One of the true gentlemen in wrestling, and a legend, was Mad Dog Vachon…In the ring, he was surpassed by nobody.”

“He set his own tempo, and he cut his own path…He was respected without any question as far as his talent; his style and his class was all his own. I can’t deny him one ounce of space, because if you wanted a complete rugged SOB he would be the man.”

“I’m wrestling the Mad Dog in his hometown…and he was a babyface. So when he got in the middle of the ring, the Mad Dog says to me, ‘We got to give them a barnburner here. They expect that we’re going to knock the hell out of each other.’ So we started out the match wrestling, and then all of a sudden it was kick, stomp, throw out of the
ring…Mad Dog came out, he hit me with a chair, and out the aisle we went. We ended up in the dressing room fighting, and I yelled… ‘Mad Dog, there’s no people here! It’s just the boys; let’s get the hell out in the arena!’ So we finished off the match…we gave them what Mad Dog wanted; he wanted a barnburner and we gave them a barnburner. Mad Dog I think carried it a little bit too far.”

“Mad Dog was probably the consummate interview guy. Whether it was behind the cage or it was in a workshop trying to construct a coffin, or whatever it happened to be, he was a classic in every sense of the word…I think what everybody has said about him is what it is. He was kind of a favorite of mine and I think he was a favorite of the boys in the locker room, and certainly even though the fans at one time or another probably hated him vehemently, he ended up being kind of the guy that they loved to hate.”