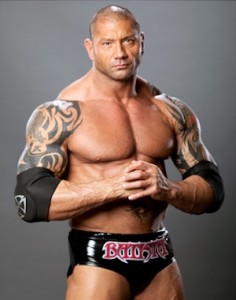 Former WWE superstar Dave “Batista” Bautista was interviewed by Brian Scocia for “The Scocia Network.” Here are some of the highlights:

On switching from Rashid Evans to Vince Lucero as his debut opponent:  “It shook me up a little bit, yeah. I was coming in for a guy that I trained to fight for eight weeks. Now, I’m kind of in a little bit of the unknown fighting a guy that’s had 43 pro fights.

On what it feels like going into his first professional MMA contest:  “Butterflies, I’m a bit nervous but excited at the same time. A lot of times, you can reallt use that energy and really focus it and use it to your advantage. That’s what I’m hoping to do.”

On whether or not he’s received backlash for criticizing WWE’s product:  “A little bit. I really try not to be critical of WWE because I really love WWE. At the end of the day, I’m always going to be a WWE guy. But, it just really took a turn that was foreign to me. It’s something I just didn’t agree with. I just don’t understand how they’re doing wrestling now. It’s just become too bubblegum and they’ve really just locked down — it seems like they’ve just taken a lot of the guys tools away and given them less to work with. It really just kind of cheapens professional wrestling.”

On whether or not he would ever go back to WWE:  “Yeah, definitely. … I’d definitely go back, it really just depend on who I’d be able to work with.”

On why he coughed so much when he was wrestling:  “Yeah. [Laughs.] And I still do. I’ll be training and people will always ask me, ‘Are you OK?’ You ever have that kid when you were in school that was always with the asthma inhaler and always blowing his nose? That was me. [Laughs.] I’m an asthmatic with allergies and it’s always something I’ve suffered from but learned to deal with. … Again, that’s always one of the challenges and that’s really why [I’m going into MMA, as a personal challenge.

On whether or not he would ever face Brock Lesnar in MMA:  “Absolutely, I would take him. And it’s just one of those things that it’s just a challenge to me. If someone offered me a fight with a former UFC champion, why would I not take it? If I get my butt kicked, ‘Of course you’re supposed to get your butt kicked by a UFC heavyweight champion.’ But, if I happen to win… [Laughs.] It’s just a win-win situation for me.

On whether losing in MMA would hurt his stock as a professional wrestler:  “I don’t think so, I really don’t. Obviously, you take, for example, Brock — Brock did not win all his fights. He went back and he’s still the same sports entertainer that he always was.”

Comparing Vince McMahon and Dana White:  “I think [Dana] stole Vince’s playbook. I think he’s doing the same thing for MMA that Vince did for professional wrestling. I really think that he’s used Vince’s guidelines, I really think he stole Vince’s playbook. Even with making UFC more entertainment-based and letting the fans get to get a personal outlook on the fighters. I think that the way that he’s bought up the smaller organizations and absorbed their talent and things like that.”

On whether or not he would considering fighting in UFC:  “When I first got the idea to do this, we had reached out to UFC and they really just said that they wanted me to have some experience. They wanted me to take a few fights, smaller fights and that wasn’t really the deal I was looking for. I wanted to just jump in head first and start fighting. … I totally understood, I wasn’t offended. I got it, even Brock took smaller fights before he went to the UFC.”

On what member of the current roster would do well in MMA:  “I’ve heard that Daniel Bryan is actually a really talented martial artist.”

This thread is located at http://forums.onlineworldofwrestling.com/showthread.php/20175-Dave-Bautista-Talks-Vince-McMahon-amp-Dana-White