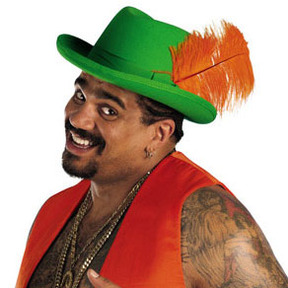 LordsofPain.net writer Daniel Pena reports that Charles Wright, more famously known as The Godfather and Papa Shango, recently spoke to IMETAWrestler.com on a slew topics concerning his career. Highlights from the interview are as follows:

On the Papa Shango character: “I used to read books on voodoo, in fact I built an entire voodoo library. Everything I said in my promos was real and legit. All the props were from voodoo stores. It was totally authentic. The effects guys worked with the staffs and sticks so that they all did something different. I had a bunch of them – some would shoot sparks, others had smoke and lights that came out of them.”

How Sid messed up the character: “Papa Shango was supposed to last much longer in the main event but Sid f—ed it up. It was supposed to be Sid and Warrior headlining SummerSlam [1992], but Sid didn’t want to do it and he quit. He had his own issues, he said Vince had brought him in under the promise of replacing Hogan as the top babyface and it wasn’t going the way it was supposed to. So Papa Shango was fed to Warrior instead. The problem was, with a character like Papa Shango, once the losses piled up, the character lost a lot of that mystique and invincibility, and it was all downhill fast from there.”

Papa Shango returning in 1997 but replaced by Kane: “A lot of people don’t know this, but Papa Shango was going to return in 1997. It was going to be a more gritty, realistic version with a mask instead of paint.They created the costume and the new entrance. But what happened was, the decision was then made to do Kane. I guess they felt there wasn’t enough room for two dark, supernatural characters, and so I became Kama Mustafa and they put me in The Nation. I’ve still got some 8×10 promos of me in the new mask and gear.”

Why Vince put The Rock in The Nation: “The Rock was put into The Nation to protect him. Vince had big plans for The Rock from day one and was worried that he had been getting bad advice from the wrong people. Some jealous dudes had been getting into his ear. So Vince put Rock in the Nation so he could benefit from the guidance of Ron [Simmons] and myself. It was the same thing with Mark Henry. Mark was a big long term investment that was getting some bad advice, learning some bad habits, and so Vince put him under myself and Ron for guidance. Both those guys were struggling.”

Vince’s opinion of The Godfather: “Vince loved the gimmick. Loved it. He used to go to bat for me so many times – fighting the networks, fighting the executives. He did everything he could to keep the character as a central part of the show. Vince used to come to me and say, “Charles – he always called me Charles – you’re having too much fun out there. You should be paying me!” And that didn’t surprise me – Vince is the biggest pimp of them all!”

On the Attitude Era: “I got away with talking about weed so openly on TV because the network executives had no idea what I was saying. They didn’t understand the slang. They had no idea what a “fatty” or a “blunt” was, so I was able to say all this stuff and they had no clue. My friend in Cypress Hill said he was amazed at the shit I got away with.”

On almost joining WCW and the nWo: “I almost went to WCW to be Hogan’s enforcer in the nWo. I named my price, the contract was being drawn up, and then at the last minute, I got a call saying the contract was being retracted and there was no longer an offer for me. I was stunned, man, just stunned. I asked why, and it turned out that Virgil offered to do it for a third of the price because he wanted to be back on TV so bad. That dumb motherf—er cost us both.”

Question: Do you think Papa Shango should have had a longer run at the top?