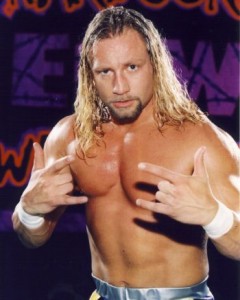 Former Ring Of Honor Champion and former ECW World Heavyweight Champion Jerry Lynn was the featured guest on this past week’s edition of the award-winning Monday Night Mayhem. You can now feel The Mayhem every week only on the WrestleView Radio Network.

Jerry Lynn joined The Big Mosh, “The Chairman of the Board” Todd Vincent, and Jim Molineaux for his final-ever interview on Monday Night Mayhem, which is now available for FREE download, exclusively on the WrestleView Radio Network:

His motivation for continuing to wrestle, despite thinking the subject of “retirement”  for the past five years: “I love it. I have a passion for this that nobody will ever understand. The person that may realize this is Jake ‘The Snake.’ I’ve seen a lot of people come and go, but if you want to last, you must have a true passion for it to keep going through all of the politics, the injuries, and the sacrifices you make. And what I love about this is that you never stop learning. I’m still learning. There is so much more that I want to keep learning about it.”

The one thing he wishes he could have done over in his career and the advice he gives to those just starting in the business based on that: “One of the only regrets I have is I didn’t feel comfortable taking a move one time. I got talked into doing it, and it messed up my arm for life. So I always tell young guys that if you ever don’t feel comfortable doing something, don’t be afraid to say no, because it is your life on the line.”

If his forthcoming retirement is just from wrestling inside the squared circle or if he will be stepping back entirely: “In-ring that it. I don’t have a choice in the matter. My body is done. My bump card is full. I’m on fumes now, and I’m really pushing it. I’m just trying to get around to a lot of my regulars one last time. There’s a couple of independent groups like Crossfire in Nashville, and Extreme Rising, and there might be a few others that may be interested in using me as a road agent behind the scenes to help them with the shows. You never know. I may be interested in being a trainer for the WWE one day. But that needs to be put on the back burner right now, because then I’d have to pick up and move the family. But again, they would have to be interested in me. I couldn’t just show up and say ‘I’m here!’ But I would love to be involved behind the scenes, because I have a passion for this. There’s a lot more I’d like to learn.”
Much more is contained in Jerry Lynn’s exclusive Monday Night Mayhem interview, including how he is preparing for “Final Battle 2012,” words for his final ROH opponent, his memories of The Hammerstein Ballroom, if he regrets never having the chance to perform at a WrestleMania, why he was disappointed in how things turned out in TNA last fall with the rekindling of his feud with Rob Van Dam, the top performances & moments of his entire career, plus much more! Log on to www.ROHWrestling.com to purchase tickets for “Final Battle 2012” or to place your order for the Ring of Honor’s final iPPV of 2012.