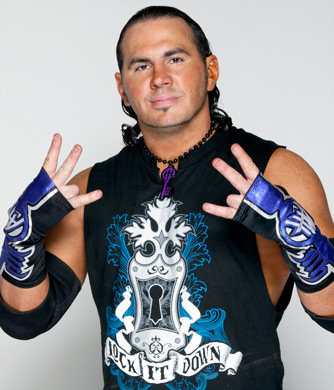 Being part of the birth of extreme wrestling: “You can go back to the first TLC ladder match with Edge and Christian or even before that to the original Omega. Myself and my brother were two of the guys who wrote the dictionary definition of extreme wrestling. Once we got to the WWE and we got the chance to have the ladder matches and the cage matches, we took them to a different level. We opened up a lot of doors for a lot of smaller guys to do more athletic, interesting, and entertaining stuff.”

Meeting and working with his wife, Reby Sky: “Reby and I first spoke online after a fan introduced us via Twitter. We’re having a blast together. We’re newly married, we travel together, and we’re big on promoting ourselves and branding ourselves as “SkyHard”. We’re enjoying being our own boss. We’re very public people. We’re both big tweeters, we love social media; we mesh very well. When it comes to oversharing, we’re both on the same page.”

His future in wrestling: “For so long, I felt like I was in a wrestling bubble. You (always fight) to move up a level, to be on tv, to be a champ, etc. I’ve dropped all that right now, and I truly enjoy what I’m doing right now. I don’t want to be under contract. I don’t deal with politics, I don’t deal with stress, and I’m having fun again. If it leads me back to Ring of Honor, or TNA, or WWE, then so be it; but that’s not my end game.”

The state of the wrestling business: “Nothing’s extremely red hot or extremely stable right now. WWE is set; it’s not going anywhere – it’s always going to be around. People will always complain, but they have so many corporate sponsors and nothing is going to happen with them. There is a lot of speculation about TNA right now, there are a lot of rumors going around; I don’t know anything personally. In my opinion, the better TNA does, the better it is for business. Wrestling is a little hokey nowadays compared to what it should be, but that’s because TV is so advanced. You can’t insult viewers intelligence; you can go online and find out anything.”