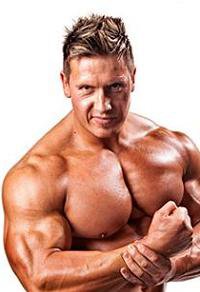 Thanks to David Dexter for this report:

Nothing less than excellence will do for Rob Terry. This British wrestling beast uses bodybuilding to hone his insane physique and competitive edge!

Want a bodyguard? Want that bodyguard to be 6-foot-5, 295 pounds, and ripped to the bone? If that sounds about right, then Rob Terry is probably your man.  Terry is currently the bodyguard for TNA Impact Wrestler Robbie E, but that’s not all. The Welsh superstar has made a splash worldwide. As a former MuscleMania world champion and British Invasion stud, he’s left a lasting imprint on the wrestling business.

Whether in the ring or in the gym, Big Rob is intense. He attacks the weights like he thrashes an opponent: hard, fast, and furious.  The weights should be grateful—he’s never hit them with his signature “Freak Buster” finisher.

We sat down with The Freak and tried to gain insights into his training without pissing him off:

Which came first, bodybuilding or wrestling?

Rob Terry:  Bodybuilding. I started lifting when I was 13 to supplement all the sports and activities I was into. Despite my interest in sports, professional wrestling was already a huge factor in my life. I would see these huge superhero-like men on TV battling each week. I looked up to them. I wanted to be like them. I had no idea that bodybuilding would eventually lead me to wrestling.

How would you explain your overall philosophy on training?

Rob Terry:  My philosophy on training boils down to one thing and one thing only: intensity. Intensity is what I bring to the wrestling ring and to the weight room; it’s what takes me out of my comfort zone and pushes me to the next level. There are many training routines out there. People tend to jump from one program to another. I believe that no matter what program you’re using, if you apply intensity, believe in what you’re doing, and give 100%, you’re going to grow.  What is your favorite body part and can you share one of your favorite routines?

Rob Terry:  One of my favorite body parts to train would have to be my back, which I consider a weak point. I’ve acquired that V-shape with wide lats, but because my back is so wide, I need more depth in the center. So, I constructed two different back routines, both of which I hit once per week.