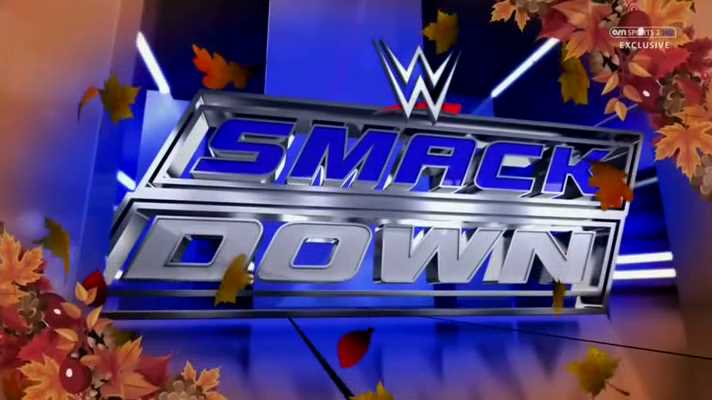 On a special Thanksgiving edition of SmackDown, The Lunatic Fringe earned his chance at Intercontinental glory in a main event slugfest against Tyler Breeze and Dolph Ziggler. Plus, the Gobbledy Gooker dropped in on The New Day, and Roman Reigns explained his extreme plans for his World Title showdown against Sheamus at WWE TLC.

A very determined Roman Reigns kicked off SmackDown. He recalled his childhood dream of becoming WWE World Heavyweight Champion and how that dream was shattered when – just minutes after he won the title at Survivor Series – Sheamus cashed in his Money in the Bank contract and stole it away. As he resolved himself not to let that atrocity stand, The Celtic Warrior emerged.

Sheamus proceeded to mock Reigns relentlessly, rejoicing in the fact that he once again stood at the top of the mountain. While the black-clad Superstar challenged him to come down to the ring right there and then, the new World Champion opted to leave his adversary to his “broken dreams.” Before he could go, however, Reigns explained his intention to use tables, ladders and chairs to get back what was his at WWE TLC.

In the height of horrific tag team action pitting The Dudleys against Braun Strowman & Erick Rowan, Luke Harper invaded – bringing an end to the match by disqualification. This paved the way for The Black Sheep to lock D-Von in his excruciating finishing maneuver. Then, Harper and Rowan hurled Bubba Ray through the table. Follow the Buzzards!

On the heels of her defeat at the hands of Divas Champion Charlotte at Survivor Series, Paige’s follow-up contest against the titleholder on Raw ended in a double count-out. The Diva of Tomorrow then locked the champion in an excruciating post-match PTO on the announce table.

Fast-forward three days to SmackDown, where Paige took part in a return match against Becky Lynch – the red-haired beauty who suffered the same fate as Charlotte just weeks ago in the United Kingdom. In spite of the fact that the Lass Kicker nearly locked in the Disarm-her in the final moments of their contest, Paige was able to avoid it and held her opponent’s shoulders down for the three-count.

Big E, Kofi Kingston and Team B.A.D set out to celebrate Thanksgiving on SmackDown, New Day style! And though Heath Slater’s Band-Aid infested “Slater-Slaw” and Adam Rose’s Rabbit Stew did not quite make the grade, it was The Ascension that would ultimately be kicked out for not bringing anything to the potluck.

The highlight of the gathering came moments later, however, when Xavier Woods emerged dressed as the Gobbledy Gooker – a “creature” celebrating the 25th anniversary of his debut in WWE.

Prior to their highly-personal match against Jack Swagger, Alberto Del Rio and Zeb Colter insulted The Real American and the WWE Universe alike, dismissing them as a bunch of haters.

In the heat of the subsequent showdown, just when the patriot grappler seemed to have the United States Champion right where he wanted him, Swagger made the mistake of turning his attention to Colter. This gave The Essence of Excellence time to regroup and launch a fierce chair assault that brought about the disqualification. When he went back for more, though, Swagger turned the tides and unleashed a retaliatory chair assault of his own.

After his appearance at The New Day’s Thanksgiving potluck dinner earlier in the night, the Gobbledy Gooker accompanied Kofi Kingston and Big E to the ring for their match against Sin Cara & Kalisto.

But, when Kingston tried to use the ropes as leverage in a pin attempt, the Gooker suddenly pushed them off! Seconds later, Kalisto blasted Kingston with the Salida del Sol for the victory.

As The New Day was still scratching their heads over what happened, Jimmy Uso appeared on the ramp with a captured Xavier Woods in tow. This prompted the Gobbledy Gooker to take off his head, revealing that he was actually Jey Uso in disguise! After The Lucha Dragons and Jimmy took out the surprised Big E & Kofi, and Jimmy hit Woods with a superkick, the Gooker leaped into the action from the top rope with a holiday splash.

In a nonstop, furious free-for-all main event to determine Kevin Owens’ No. 1 contender, all three Superstars pulled out all the stops on SmackDown.

Though Tyler Breeze looked as if he may emerge victorious – hitting the Beauty Shot on Dolph Ziggler – Dean Ambrose broke up his attempt to hit the Unprettier and leveled Prince Pretty with Dirty Deeds for the huge win. As a result, The Lunatic Fringe is the new No. 1 contender to Intercontinental Champion Kevin Owens. After the contest, the unstable Ambrose got face-to-face with the titleholder, shoving him backward. Instead of retaliating, Owens walked away to fight another day.