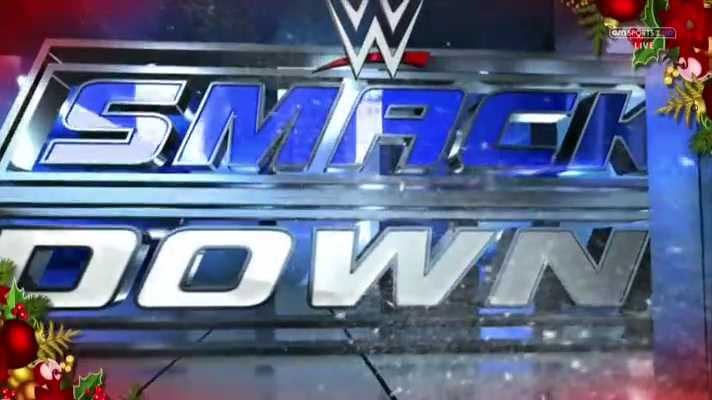 SuperSmackDown LIVE on USA Network was full of holiday chaos as The New Day revealed their new Christmas album in a way only they can, Team B.A.D. gave Becky Lynch an eggnog bath and Dean Ambrose, Dolph Ziggler and Kevin Owens battled amid Christmas decorations.

Before The New Day defended their WWE Tag Team Championship against The Lucha Dragons, Xavier Woods, Big E and Kofi Kingston addressed the WWE Universe with their usual positivity, despite the fact that they failed to win the Slammy Award for Tag Team of the Year on Monday night. The spirited trio even alerted everyone to their upcoming Christmas album, which includes songs like “Rudolph the Red-horned Unicorn.”

Once they were done spreading holiday cheer to everyone in attendance, Kofi Kingston and Big E engaged in an action-packed battle against Kalisto & Sin Cara. The masked challengers brought their trademark high-flying offense to the match, but with the boisterous Woods and his trombone at ringside, the numbers were not in the Dragons’ favor. After knocking Woods from the ring apron, Sin Cara attempted to hit a spectacular springboard moonsault on Big E, but was caught in mid-air and slammed to the mat via the Big Ending for the 1-2-3. Indeed, the WWE Universe is in store for a very “booty Christmas.”

The Wyatt Family defeated Kane, Ryback, and The Dudley Boyz in an 8-man tag team match

Despite joining forces in recent weeks with fellow ECW originals like Tommy Dreamer and Rhyno, and teaming with Demon Kane on Monday night, The Dudley Boyz have yet to figure out The Wyatt Family. On SuperSmackDown LIVE, Bubba Ray & D-Von once again found themselves on the side of the Devil’s Favorite Demon, but this time they also were joined by Ryback against Bray Wyatt, Braun Strowman, Luke Harper & Erick Rowan.

Even though they had two of WWE’s most physically commanding Superstars on their side, The Dudleys couldn’t topple their commanding rivals. After the Wyatts disposed of Kane, The Human Wrecking Ball and D-Von outside the ring, The New Face of Fear introduced Bubba Ray to Sister Abigail back inside the squared-circle for the victory.

Monday night on Raw, The Usos managed to defeat The New Day in a 3-on-2 Handicap Match, but they couldn’t overcome the odds on SuperSmackDown LIVE. The WWE Slammy Award winners for Tag Team of the Year pushed Alberto Del Rio & Rusev to the limit, but The League of Nations’ strength in numbers ultimately prevailed. With the referee’s attention turned toward King Barrett on the ring apron, The Super Athlete kicked Jey Uso in the back, allowing the United States Champion to hit his top rope stomp on the tangled up Uso for the win.

Following the contest, the foreign faction continued to attack the fallen Usos until Roman Reigns arrived, helping his Samoan cousins clear the ring of their rivals.

Titus O’Neil and Neville stood up for Christmas

Titus O’Neil and Neville, elf ears and all, came to the rescue of Santino Marella’s Christmas party. Stardust and The Ascension had plans of canceling the holiday, but The Real Deal and The Man That Gravity Forgot made it clear they weren’t going to let Christmas go down without a fight.

Earlier in the evening, Stardust & The Ascension attempted to play the role of the Grinch when they stole Santino Marella’s Christmas decorations, prompting a Christmas party argument involving Santino, Titus O’Neil, Neville and The Cosmic Wasteland. As a result, The Real Deal and The Man That Gravity Forgot put their elf ears on in hopes of saving Christmas in a tag team clash against Konnor & Viktor.

Amid a heated holiday battle, the high-flying Neville showed why he won the Slammy Award for Breakout Star of the Year when he hit his eye-opening Red Arrow on Viktor for the pinfall.

Just as Charlotte gained control of her match against Brie Bella with a big Spear, Team B.A.D. arrived, decked out in their best holiday attire. Sasha Banks, Naomi and Tamina went straight toward Becky Lynch – who was sitting in on commentary at the SmackDown announce table – throwing a drink on the fiery Diva. The Irish Diva retaliated by tackling Naomi, but was soon overpowered by all three members of the Divas faction.

The Divas Champion witnessed all this from the ring, choosing not to come to the aid of her friend, but instead locking in the Figure-Eight on Brie to force the tap out. After the contest, Charlotte seemed amused at the sight of the drenched Lass Kicker, who cleary was not happy with what transpired.

SuperSmackDown LIVE’s main event Triple Threat Match for the Intercontinental Championship did not disappoint as Dean Ambrose, Dolph Ziggler and Kevin Owens battled in a holiday slugfest. With Triple Threat Match rules in effect, all three Superstars took their championship clash up the ramp using SuperSmackDown LIVE’s Christmas decorations to further the chaos. Trees, ornaments and gifts went flying as The Lunatic Fringe, The Showoff and KO used every decoration in sight to inflict further damage.

The carnage continued back into the squared-circle as all three competitors traded vicious blows. At one point, Fight Owens Fight delivered a brutal suplex to the unstable Ambrose, who landed directly on his head. As the referee checked to make sure the titleholder was OK, the unforgiving Owens continued his offensive onslaught against Ziggler outside the ring. Finally, with all three men at their limit, Ziggler superkicked Owens out of the ring, subsequently opening up an opportunity for Ambrose to hit Dirty Deeds on his unsuspecting challenger for the win.