Home / Columns / FROM THE VAULT: Rise of the Phoenix?

FROM THE VAULT: Rise of the Phoenix? 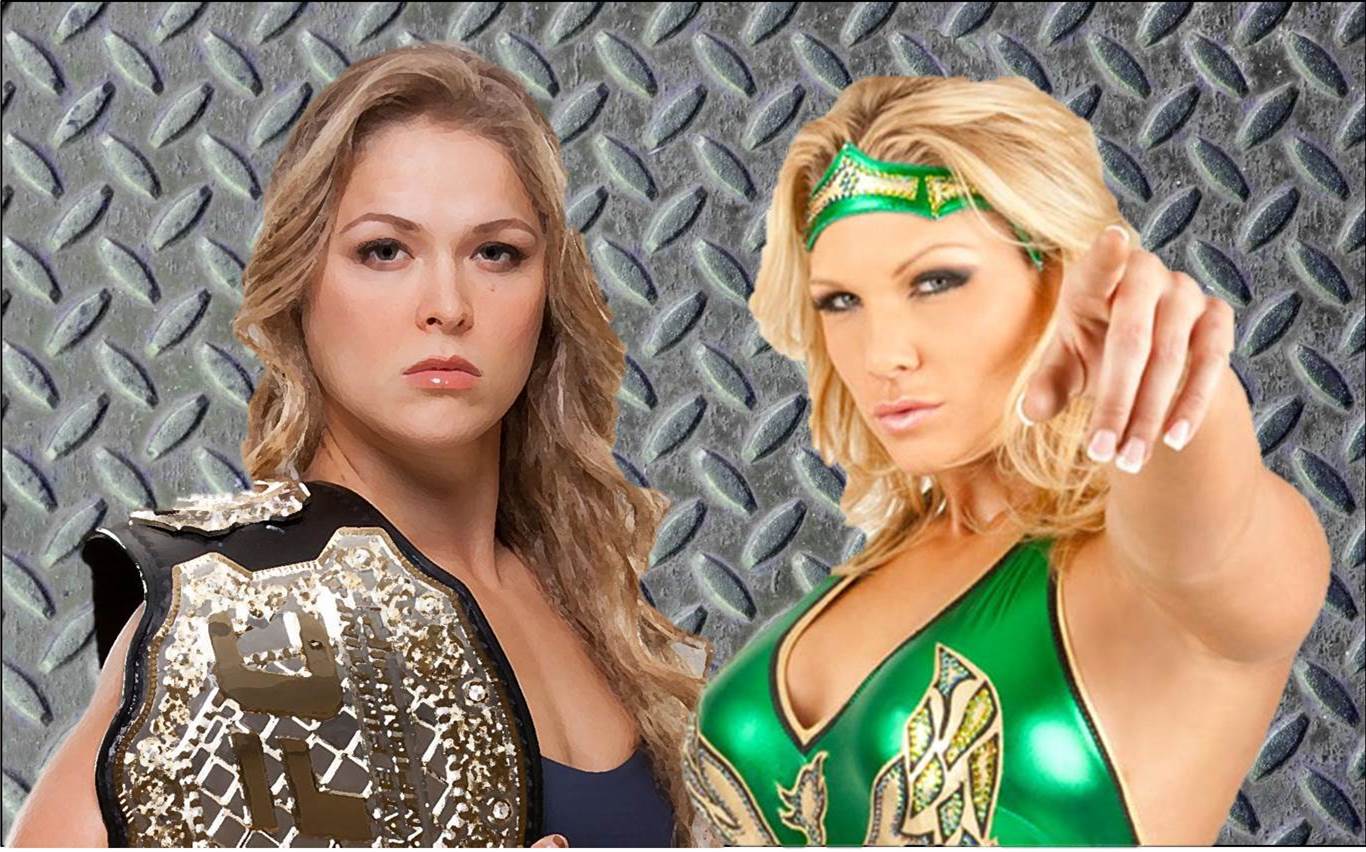 Editor’s note: This column was originally published in July of 2014.  In light of Ronda Rousey’s career now in WWE, I thought I would repost it.

I was watching UFC 175 a few weeks ago because anything that involves pizza, beer, and friends is OK with me. I’ll admit I’m not a huge UFC fan; it will never captivate me like professional wrestling. But I do appreciate the athleticism and skill set it takes to compete in the octagon. In other words, I watch UFC once in a while because it is a fun social night out.

I don’t know many of the individual competitors but what I enjoy most about UFC is that regardless of the fighters I can always enjoy the “fight”. I don’t need to know much about the participants, the world-class announcers build the match-ups well and I always find myself with a rooting interest.

At UFC 175 Dana White pieced together a very good line-up, headlined by the middleweight champion Chris Weidman, with female superstar Ronda Rousey booked as the co-main event. I knew a little bit about Weidman, and I certainly knew about Ronda Rousey. I mean at this point who doesn’t know Ronda Rousey?! (I’m looking at YOU Floyd Mayweather!) If nothing else I would enjoy those two fights.

The undercard did hold my attention and got everybody warmed up for the main events. I especially enjoyed Uriah Hall. I had never heard of him before, but after this pay-per-view he will always be known as “Uriah Hall’s broken toe”…good lord that was nasty!

Chris Weidman’s title defense was very competitive. The challenger, “The Dragon” Lyoto Machida, started slow, but he hung in there to push the champion. In the end Weidman retained the title and cemented himself as one of the true stars of UFC.

Then there was Ronda Rousey.

What in the name of Mike Tyson was that?!? I had never seen her fight “live” before, and on this night the UFC women’s bantamweight champion absolutely destroyed someone named Alexis Davis. The official time was 16 seconds. 16 seconds!!  What a beating. It really was “Tyson-like”. It was short, brutal, and absolutely exhilarating. I was breathless after the fight was over.

I saw this coming after watching their entrances to the ring. Poor Alexis looked like someone going to the dentist, with a goofy smile and nervous demeanor. Even her theme song “Royals” was a joke. “I’ll never be royal…” Talk about a premonition. Then Ronda came out of her dressing room…bad ass song, bad ass look…and Davis was completely outclassed in every regard.

I told my friends during the introductions, “Holy shit Ronda’s going to kick her ass!”  Nobody argued.  And it wasn’t because of the statistics or metrics or “reach advantage”. We all know Ronda’s bio.  At the 2008 Summer Olympics, Ronda became the first American woman ever to earn an Olympic medal in Judo.  In November 2012, UFC announced she had become the first female fighter to sign with them. Now she is the consensus #1 pound-for-pound female MMA fighter in the world. And it’s not even close.  Ronda Rousey is undefeated for a reason.

That in itself would cement her star power. But then there is her sex appeal. Wow. Her beauty is unmatched within her sport, but unlike fellow sex symbols Anna Kournikova and Danica Patrick, she actually WINS! (I should be struck by lightning because Danica is so beautiful it makes me dizzy…but she doesn’t actually “win” races…which is sadly the truth…) Thank you ESPN for putting Ronda in your Body Issue.

Side note – Ronda reportedly likes sex…a LOT.  Rousey is on the record claiming that in the weeks leading up to her big fights she tries to have as much sex as possible. Apparently it builds up her aggressiveness or something. Wait…what? I thought fighters were supposed to AVOID sex for a few weeks so they come to the ring with weeks of pent up frustration, ready to pounce on their opponent. Even better, if Ronda is not “dating” anybody at the time, she finds a “temporary” boyfriend for these few weeks (ummm, how do I become eligible for THAT job?!?)  God bless her.

But all of that is window dressing.

We all knew Ronda was going to kick Alexis’s ass because, more than anything, the best thing about Ronda Rousey is that she comes to fight. For all of the media attention, magazine covers, photographs, and glamour that has become Ronda Rousey, give her credit, she is always prepared to rip out her opponent’s throat. What a beautiful, skilled, powerful, masterful athlete. It is such a rare combination.

Ronda came out of her dressing room and carried herself like a champion in every regard. She entered the octagon and kicked the living shit out of her opponent. 16 seconds. (And what a side headlock takedown!)  It really WAS like watching vintage Mike Tyson when he was the “baddest man on the planet”. I was a teenager back in the 1980’s so I remember Tyson’s glory days. There has been nothing like it since. Until now.

The whole thing was intoxicating to watch.

I love when athletes are even better than advertised and on this night Ronda backed up all the hype.  After her victory, officials placed the UFC championship belt around Ronda’s waist. A beautiful belt for a beautiful athlete. (By the way, does anybody NOT think the UFC belts are the best in sports? Maybe the “white strap” version of the WWE Intercontinental title is a close second?)

As they were fitting Ronda with the belt the whole scene reminded me of professional wrestling.   I don’t know Ronda personally (obviously) but she carried herself that night like a classic heel. Almost like Brock Lesnar: Eat, Sleep, Conquer, Repeat. Maybe she is the sweetest person but she had the look and feel of a pro wrestler that just devoured her opponent and was waiting for the next victim, if there was anybody out there who could actually stand up to her raw power. I half expected someone’s theme song to start playing as they walked out in front of the Titan Tron, throwing down a challenge.

Then I laughed, because even if this WAS professional wrestling, who would be a believable challenger for this machine. Nikki Bella? AJ Lee? Gail Kim? No. No. No. The funny thing is the whole scenario isn’t that far-fetched. Rumors have circulated that Ronda would actually appear on WWE television at some point, albeit in a ‘non-wrestling capacity’. That’s probably just as well. Nobody could handle her, I don’t care how ‘scripted’ this business is.

Then it hit me! The reason I enjoyed Ronda’s performance that night was because Ronda Rousey is the perfect motivation for my beloved Glamazon, Beth Phoenix to return to wrestling!

By all accounts Beth is doing well in her life away from the ring. She is a new mother and enjoying aspects of life that are not possible when you are on the road 300 days a year. I suppose retiring from WWE made sense at the time, the WWE wasn’t really using her character well (losing to Maria Menounos?), but if she IS thinking of returning, I highly doubt Beth would come back to wrestle Paige…or Cameron…or Nikki Bella. Been there, done that.

But how about Ronda Rousey? Or better yet, how about training for an MMA-style fight where she can showcase her OWN considerable physical gifts? Don’t forget Beth Phoenix is a legitimate wrestler who had a successful amateur wrestling career in high school. Beth Phoenix is not the stereotypical “model-turned-wrestler”. She has authentic toughness and strength. There is a reason WWE allowed her to enter the Royal Rumble in 2010.

I know she doesn’t have MMA training, but seriously, Beth couldn’t handle Alexis Davis? The problem, obviously, is that Ronda Rousey is no Alexis Davis. She’s the best in the world at what she does, so in an MMA-style match Beth would lack the overall technique to defeat her. I know this. Even with a 15-20 pound weight advantage, it would be too much for Beth to overcome. (I don’t know why they even have weight classes in the female UFC division…how many are there, two?)

But how about a professional wrestling match? You could sell Rousey vs. Phoenix at WrestleMania. Rousey is already a cross-over star, appearing on magazine covers and in feature films (she has roles in The Expendables 3 and Fast & Furious 7), so she likes show business. And Beth is already a physical presence, a dominant female wrestler. If pro wrestling is about storytelling and “suspension of disbelief” then this is perfect.

UFC 175 was a great show, another successful night for the company. On the walk home I remember thinking “nobody can beat this bad-ass chick”. Then I got home, walked downstairs, saw my Glamazon poster, and thought, “Well, almost nobody…”