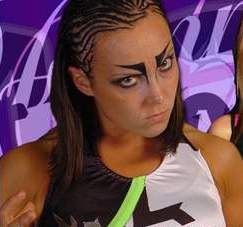 Sara joined Jack and OIB to open up the show. Sara will be wrestling against for WWE superstar and current TNA wrestler Mickie James on April 2nd in Marietta, Ohio for Remix Pro Wrestling. For more information head over to www.remixprowrestling.com

Sara is really excited to wrestle Mickie and considers it not only a dream match for the fans but also a dream match for herself. Jack mentions that their match is the main event of the show, which excites Sara because that is a rare thing to see. Sara never gets nervous when she wrestles someone she hasn’t competed against before.

Duane asked if Sara believes Ring of Honor is focusing more on women’s wrestling and thinks they are doing a great job of bringing in talent. For more information on Ring of Honor head over to www.rohwrestling.com

Jack brings up LuFisto’s promotion in Canada, which was a lot of fun for Sara to work for.

Sara doesn’t really get the same feeling of the ECW Arena like the diehard wrestling fans might have.

Nikhil asks Sara’s about her thoughts on Taylor Wilde retiring and Awesome Kong signing with the WWE. Sara is disappointed that she couldn’t wrestle against Wilde because he is a big fan of Wilde’s. Sara is happy that Kong has been signed, but wants to see her on television every week.

Sara is excited to compete against Japanese wrestlers who are coming into ROH for the Wrestle Mania weekend show.

A quick fifteen minute interview as Sara was training with CHIKARA at the ECW Arena!
For the full audio please visit: www.inyourheadonline.com