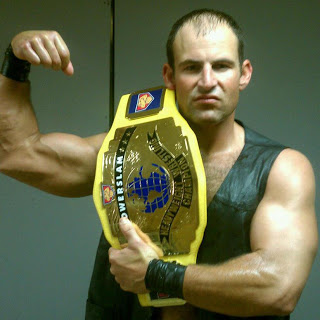 “The Southern Stomper” Luke Hawx recently took some time to sit down for an interview with PWMania.com. Hawx, who hails from New Orleans has been wrestling for almost 15 years and currently competes for the up-and-coming promotion Extreme Rising. Hawx speaks on several topics from meeting Vince McMahon, feuding with Matt Hardy, WWE, Extreme Rising and more. Hawk’s also shares a funny story involving him and Vince McMahon.

Meeting Vince McMahon: I have met Vince every time that I have gone to WWE. When Vince McMahon sees you, he shakes your hand, he looks you in the eye and gives you full attention.

A Funny Vince McMahon Story: I got a funny story about me and Vince, actually. One time we were in LA and the Boogeyman was late for a show. One of the producers asks me if I can play the part of the Boogeyman as a practice run. They wanted me to get in the ring with Shawn and Hunter and do the Boogeyman’s character.

So Vince comes up to me and asks “You know who the Boogeyman is, right?” I said yes sir. He asks if I know what the Boogeyman does and I said yes sir. He asked if I knew the walk, talk and everything about the Boogeyman. And I said I think so. And Vince looks at me and says “You think so? Or you know so?” And I said, yes I know so. He says “We need you to do everything the Boogeyman does including eating the worms.” And I’m thinking “Oh my God, I don’t want to eat the worms.” But I go through with it, I’m doing the whole character and everyone’s laughing and having a good time. So, it was pretty fun. But that is an example of Vince’s mindset. He is the boss and he calls the shots, so when he asks you something, you give him a yes or no, not “I think so.”

Feuding with Matt Hardy: It’s helped my career tremendously. Matt Hardy is one of the biggest names in wrestling history. He gets recognized everywhere he goes. He’s made his money, he’s worked hard. He has had his demons too. But seeing that he was able to come out of that and still wrestle is respectable. This feud was a challenge for him as well as me because this was basically a real story. We had our problems in the past, so it was based off of that. But even when we had our falling out, I still respected him. He never has to wrestle another day in his life.

Yet during this feud, he showed so much passion, so for him to come at me made this feud one of the hottest in independent wrestling last year. I had a lot of fans come to me saying this was the biggest feud in wrestling overall. They said they were watching what was happening on TV, but thought that nothing had the intensity of Hawx vs Hardy. And because of this rivalry, people who had never heard of Luke Hawx before started to recognize me. It really established my name and made me a key player. It had something that you just can’t write. It was all real life stuff and was a big positive for me. It’s always the real stories that break out guys.

The best part about this was that it got my passion across because I have a lot of passion for the business. I respect Matt Hardy because he worked hard and he showed up every time. He came to go to war. And I love a good fight.