The 25 greatest matches in SummerSlam history! 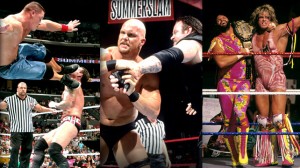 So what qualifies a match to be labeled as one of the 25 best in the history of SummerSlam?

To tabulate the rankings of SummerSlam’s best bouts, the editorial staff of WWE.com was charged to consider every clash from WWE’s midsummer marquee event with one simple criterion: the match is as important as the moment. So while Ultimate Warrior crushing Honky Tonk Man at the inaugural SummerSlam in just more than 30 seconds was impressive in its own right, the battle’s brevity might pale in comparison to some of Bret “Hit Man” Hart’s best contests or The Undertaker and Edge colliding in a Hell in a Cell Match.

From there, the editors ranked their favorites and the result is what follows on these pages. So sit back, relax and get ready to take a trip down memory lane by reliving the spectacular highs and soul-crushing lows of what WWE.com has selected as the 25 greatest matches in the history of SummerSlam.

QUESTION: What matches would you put on the list?