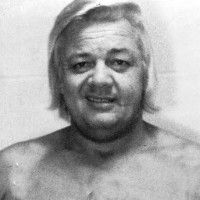 He was arguably the biggest draw and the biggest star in his southern homeland, and now he is a part of history. “The Fabulous” Jackie Fargo,85, succumbed to long-standing heart disease on the morning of June 24, 2013, a week after being hospitalized in his longtime home, China Grove, North Carolina.

Born Henry Faggart in Concord, NC on May 17, 1928, he began wrestling in 1950 on indy shows in the state under the unassuming name Dick Bishop. He became something of a star in Cuba two years later, then did a stint in the military. Back to the ring after his discharge, he took on the new identity of Wildman Jackie Fargo, expanded his horizons and invaded the northeast as a full-fledged heel. He had a great run in Boston, and then in New York where he first allied with up-and-coming Wildman Don Stevens (Don Kalt), and notorious manager Bobby Davis. The pair were together over some five years in the northeast and Tennessee., including a main event run in Madison Square Garden that drew the biggest gate in some 25 years. In the Tennessee-Alabama-Georgia area they really hit their stride, as well as in Chicago and other southern areas. Along the way, they brothered up and morphed into “The Fabulous Fargos”

Kalt came and went regularly, and finally left the tandem about 1965. An assortment of tag partners followed over the next 20 years, including Jackie’s real brother Sonny ‘Roughhouse” Fargo who was usually a referee for Jim Crockett Promotions. But there was a big difference: a major turn at this point resulted in Jackie becoming the people’s choice. He was the same strutting, cocky, flamboyant, two-fisted character as he was during his days as a heel. But now he faced down the heels, usually in tag team matches, that brought jam-packed arenas solidly to his side. He held some 55 titles, mainly tag belts, in his 30+ ring career. And though no master of the mic — his promos were always off the cuff, straightforward and loaded with emotion — he was never at a loss for words to fire up his latest war in the ring.

Along the way, Jackie encountered an eager young fellow who actually worked in his sign business in Memphis, but wanted badly to wrestle. Jackie eventually gave in to his pleas, and began to train him for the ring. The rest is history: Jerry ‘The King’ Lawler became one of the best-known wrestlers in America. The clincher came when Jackie Fargo passed the championship baton to Lawler in the finale of a long and wild series of skirmishes in Memphis on June 24, 1974. Ironically, the event took place 39 years to the day before Jackie’s passing..

Jackie’s other great success was the 1982 pairing of Steve Keirn and Stan Lane, dubbed “The Fabulous Ones”, in tribute to their mentor. Keirn and Lane were a wildfire success in the Memphis territory, thanks in major part to Fargo’s brilliant development and presentation of their talents.

“My friend, father-figure and mentor Jackie Fargo died this morning. He was the best!,” Lawler wrote. “Without the Fabulous Jackie Fargo, there would never have been a King Jerry Lawler. RIP Jackie.”

Jim Ross of WWE wrote in his blog, “Jackie Fargo was a master crowd psychologist and gave viable meaning to the term “less is more” when it came to in ring execution. Everything that he did had meaning and Fargo told such a viable, believable story that every fan in the arena knew what Fargo was doing and why, all the while being able to process the story that he was telling and emotionally invest in it.”

Natural charisma, an emotional projection on the mic, native flamboyance and a solid wrestling mind came together in Jackie Fargo. Even after his retirement in the early 80?s, he could still draw a big house when the occasion demanded his larger-than-life presence in the 80?s, 90?s and even 00?s.  He was a true legend across the south, and he’ll be an enduring presence in any discussion about the good old days, for many years to come.

Perhaps Stan Lane said it best: “He will be missed terribly, but spoken of often, with a joy in our hearts and a smile on our faces”.

The Cauliflower Alley Club extends its condolences to the family and many friends of the inimitable Jackie Fargo.