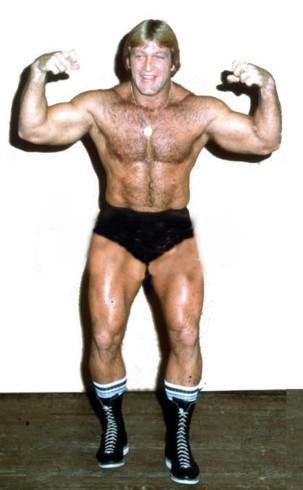 Who’ll ever forget where they were the first time Gordon Solie called Paul that during one of his great GCW squashes?  The Brandon Bull.  He was and remains that and one pretty tough hombre, cancer be damned.

I think many of us first came to appreciate what a tremendous athlete Paul was in Bill Watt’s talent-laden Mid South promotion that was the standard of excellence for U.S. wrestling in the late 70’s and early 80’s amidst a crowded field(many of the territories were still great up to and including late 1983).  Others may have first marveled at his work for Ole Anderson in Georgia Championship(always talent-packed as well).

As with the faux Paul Ellering wrestling “brother,”  I think Watts/Mid South also had a faux Orndorff brother tagging with him at the time by the name of “Terry”(similar to Watts’ former area boss, Leroy McGuirk who tried to capitalize on the earliest incarnation of Ivan Putsky with a faux brother called Igor Putski.  Oddly,  Ivan was originally a near-carbon-copy of Sheik’s Mighty Igor Vodik(Dick Garza) doing that particular non-speaking, allegedly dim-witted Polish man-child gimmick.

The thing that Paul always exuded whether in the ring or in promos, was explosive pure athleticism.  Whether face or heel(man, did he switch a lot.  Just look at his work in WWF!), one never forgot that he had a solid amateur football background at University of Tampa.  Although he didin’t pass the NFL physical for either the New Orleans Saints or KC Chiefs, he did for the World Football League’s Jacksonville franchise that was reasonably close to home for him, in ’75.  After one distinguished WFL season, he quit and entered pro graps the following year in Memphis feuding with the then seasoned Jerry Lawler.  Then there was the Tri-States feud with King Ernie “Promises Promises” Ladd and of course Georgia which brings us to our title.

Gordon Solie began calling him The Brandon Bull, which was in fact his original collegiate football nickname.  Great bouts with Bill “Masked Superstar” Eadie there and in Midatlantic amidst a well-remembered 5 month World Tag Title run with with Jimmy Snuka(besting former champs Von Rashke and Greg Valentine)  helped cement him as a draw all over the country.  Paul bopped back and forth between Alabama and Watts Mid-South(Louisiana, Oklahoma, etc) and finally homesteaded full-time for Watts in 1980.  Great matches were had there with Teddy Debiase(what a run these two had together~!), Jake, JYD, Dusty, Wrestling II, Bob Roop and even Dick Murdoch.  Back in Georgia in June of ’82, Paul beat Buzz Sawyer(“the battle of the power slams”) for the National Title, later giving up the belt on tv claiming he wanted to focus on Flair’s NWA strap.  More feuding with Larry Zbyszko, Masked Superstar and Super Destroyer at the Omni and three interesting NJPW tours, often teaming with Ed Leslie and John Studd;  then the famous singles match with shooter Akira Maeda.  When he signed with WWF in November of ’83, he had his first match in Jan of ‘84 for Vince at the Garden underneath Hogan besting Iron Sheik for the strap.  Soon he was paired with wrestler/manager(which he actually first did for us in L.A. in 1977)  Roddy Piper managing him, and dubbing him “Mr Wonderful” named perhaps after former L.A. star Rock Riddle who first used the nickname of Mr W in 1975.  Unlike the normal  WWWF and WWF hierarchy of going thru a Manny Soto, Strongbow and Monsoon first before being given a well-earned title shot, he immediately became a foil for Hogan and his belt.  But he had such heat and was such a total draw, he obviously deserved it.

Then MTV’s War To Settle The Score, that first Wrestlemania, with the post-event breakup and after-feud with Piper and Orton Sr, working with and “firing” Bobby Heenan as his next WWF manager and that near year of huge money working with Hogan on top all over the U.S. and Canada. Toronto record crowds. A brief retirement after the neck and arm injury and then a return but this time to NWA/WCW in 1990.  And how about his time later that same year in UWF for Herb Abrams?  He was lead face feuding with great heel in Dr Death Steve Williams, and reuniting his WWF Piperesque feud with Bob Orton Jr.  In ’92,  Paul was the late Gordon Scozzari’s first and only AWF world champ taking on Stan Lane as opposed to original opponent Nikita Koloff(who made the tapings, but had his arm in a sling).  Far more memorable was Paul’s time in SMW for Corny starting that same year, having great matches with Tim Horner, The R n’ Roll Express, Hector Guerrero, Brian Lee and more.  The following year, he returned to a full WCW, being paired with Vader and Harley Race and feuding first with Cactus Jack.  Later that year he feuded with the great Ricky Steamboat, Brian Pillman, Dustin Rhodes, Bagwell and more.   We all recall history from that point on, so I’ll omit and try to forget the lame skit with tv psychic Gary Spivey(no relation to Dan thankfully).  I talked to him every now and then backstage from ’95 on, as Paul then worked fulltime as a road agent.  And also a Power Plant trainer along with Jody Hamilton and Buddy Lee Parker.   Lots of fanfests up through and beyond his ’05 induction into WWE’s Hall of Fame in Los Angeles of all places, at the Universal Amphitheatre along with Piper and Hogan, Nicolai Volkoff and Iron Shiek. And old “nemesis” Bob Orton.  Back in ’86, Paul was inducted into Tampa U’s Football Hall of Fame too and many there still remark at his pre wrestling “workrate” on the gridiron.

Paul of course has been the proud father of two sons, plus eight grandchildren at last count.  And last time we spoke on my radio show, he said he’d never been happier with his life.  Paul was really enjoying his time with family and remains an avid fisherman, hunter and overall sportsman.

So of course it hit all of us hard, his announcement of being diagnosed with cancer the other day.  Roddy, Hump and Billy Graham, amongst many; emailed their love and support for Paul.  Godspeed Mr Wonderful and let’s all put out some positive vibes for him to defeat whatever cancer he’s battling the way Roddy, Duggan and others have.  What an athlete Paul was and remains.

Related Items
← Previous Story AS I SEE IT: New Japan in the U.S.A.
Next Story → The Best There Is, Was, and Ever Will Be