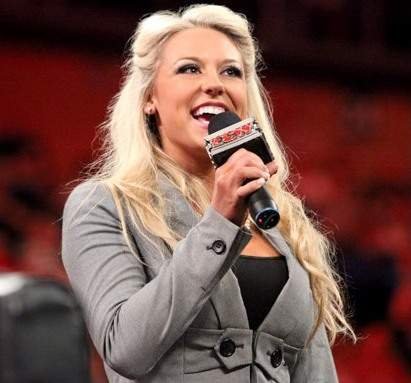 Taryn “Tiffany” Terrell Discusses Her WWE Release, Whether Or Not She Feels That Her Suspension From This Past Summer Had Anything To Do With The WWE Making Their Final Decision (And If She Believes That The Internet Took The Incident Between Her & Her Husband, Drew McIntyre, And Made It Something Different/Larger Than What It Was), If She Received Any Warnings Prior To Being Let Go By The Company, How Her Husband Took The News Of Her Release/Why She Feels That Drew Will Take Her Release As “Motivation” To Get To Be On Top In The WWE, Whether Or Not She Was Promised A Run As WWE Divas Champion After Transitioning From Her Role As ECW General Manager, How She Found About ECW Being Pulled Off The Air By Syfy/Why She Was Sad The Program Was Canceled, The Credit She Gives Teddy Long, “The American Dream” Dusty Rhodes, Natayla, Michelle McCool For Her Success With The Company, Why She Feels That The “Diva Search” Stigma Is Still Attached To Her, More Of Her Favorite Experiences & Memories With The WWE, The Fight vs. Cystic Fibrosis/Why That’s So Important To Her & Her Family, Her Future In The Business (And Why, If TNA Came “Knocking At Her Door,” She Would Be Open To Making A Knockout Debut), & A Message To Her Fans Around The Globe

Former WWE Diva/ECW General Manager, Taryn “Tiffany” Terrell, was one of the featured guests on this week’s live edition (11/22/10) of the award-winning Monday Night Mayhem. You can feel the “MNM Fall Tour ’10” every Monday evening (at 7PM ET/6PM CT), exclusively on The Monday Night Mayhem Radio Network (www.MondayNightMayhem.com).

Taryn joined The Big Mosh & “The Chairman of the Board” Todd Vincent for her debut on “Your Home of Wrestling Radio” (in her first post-WWE interview), which is now available in Windows Streaming Media or via the official MNM Podcast on iTunes:

The reason behind her positive view on her WWE release & whether or not she has any hard feelings towards the WWE: “No. It was such an amazing ride & journey, and without it, I would not have met my husband and met so many great friends. Everything in my life, whenever one chapter closed in my life, there’s always something else waiting right there. I loved it, and had such a great time, and I have nothing bad to say. There was just so many people that was always willing to help and create better talent, create a better show, and I have nothing but good things to say.”

If the WWE gave her any reason for her release or if she received any warnings before being let go by the company this past Friday: “No, I didn’t. I was on suspension for a few months there, so I knew there was a possibility, but obviously I had my fingers crossed the whole time, like ‘Please take me back; please take me back.’ When it came down to it, the decision was made by who knows and decided not to. Of course I was really sad, and I have definitely had my few days of crying, but you can’t cry over spilled milk forever.”

Whether or not she feels that her suspension from this past summer had anything to do with her release: “I have no idea. I’m so clueless as to all of that. I was kinda left in the dark with the business end of things. Whatever is going on in Stamford, we’re not really privy to. While I was suspended, I was at home, so it’s not like I was clued in on anything, so I have no clue.”

If she believes that the Internet took the reported domestic incident between her & her husband (Drew McIntyre) and made it something different/larger than what it actually was: “I’m not ever going to say what happened, but it was one huge misunderstanding. It seemed like the Internet made up an entire story of what happened. Really what it really comes down to is someone had an ax to grind with my husband & I, and obviously there was nothing that happened, because everything got dropped immediately. It was just really unfortunate that it all had to play out that way. It was certainly one huge misunderstanding, and my husband & I love each other very much, and we have a wonderful & healthy relationship. It was a shame that people had to say bad things, but that kind of just comes with the territory when you are in the public eye. People are going to harp on what they think could possibly be a negative.”

How her husband is taking the news of her release & why she feels that Drew will take her release as his own personal motivation to get to be on top in the WWE: “That actually brings tears to my eyes. We are best friends, and we love traveling together, so it’s difficult to realize that we don’t get to work. That’s all we ever known is working together. It’s sad, and I think he’s probably upset about it, but he’s tough, and he’s talented, and so good at what he does. He’s got the most insane drive & determination to be on top, and he will be there. And, if anything, this gives him even more reason to go ‘Ok I’m getting there.’ He’s sad, but he’s going to use it has motivation.”

Her future in the business & why, if TNA came “knocking at her door,” she would be open to making a Knockout debut: “I would definitely say that my future is wrestling. I was not this crazy lifelong fan. I wish I could say I was, but from the time I started wrestling before my very first tryout at OVW, I bought five wrestling books, and read them, and learned as much as I could. I immediately fell in love with the business, and I have such strong passion for it, so no matter what, I’m definitely going to be wrestling. If TNA comes knocking at my door, I’m definitely open to that, and I think Dixie Carter has done really an amazing job. She’s really put in a lot into the Knockouts division, and they have a lot of really great talent there. I would love to go there. I’d love to be with TNA. I just love it, and have such a passion for it, and whoever will have me, I am ready to get back into the ring.”

More is contained in Taryn’s first post-WWE interview, including her candid thoughts & comments on whether or not she was promised a run as WWE Divas Champion after transitioning from her role as the General Manager of ECW, how she found out about ECW being pulled off the air by Syfy (and why she was sad when the program was canceled), the credit she gives Teddy Long, “The American Dream” Dusty Rhodes, Natalya, & Michelle McCool for her success with the company, why she feels that the “Diva Search” stigma is still attached to her, her favorite experiences & memories in the WWE, why helping to fight against Cystic fibrosis is so important to her & her family, her charitable plans for the holiday season/into 2011, a message to her fans around the globe, plus so much more! The rumors & speculation can now be put to rest, as Taryn breaks her silence in this worldwide Mayhem exclusive! Log on to Taryn’s all-new official website (located at www.TarynTerrell.com), and be sure to follow the former WWE Diva/ECW General Manager on Facebook (at www.Facebook.com/OfficialTarynTerrell) & on Twitter (at www.Twitter.com/Taryn_Terrell).