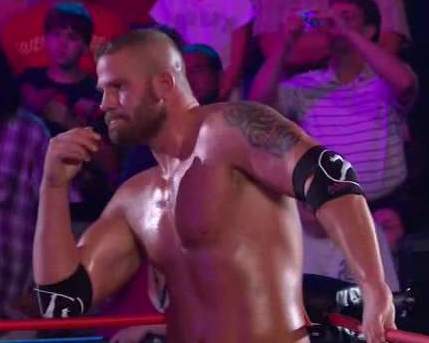 “The Blueprint” Matt Morgan Discusses Why Capturing The TNA World Heavyweight Championship At Final Resolution Would “Mean Everything” To Him (“Make This Dream Come Into A Reality”, His Plans For Jeff Hardy‘s Immortal Championship Belt After Sunday’s Pay-Per-View, The Importance Of Choosing The “Right Referee” For Their Highly Anticipated Title Bout, His Reaction To The Heel Turn Of “The Charismatic Enigma,” Splitting Away From Fortune, The Return Of Tough Enough/The Impact The Program Has Had On His Career To This Point/Whether Today’s Wrestling Fans Will React To It Favorably, & His Goals For Himself/For TNA In 2011

The #1 contender for the TNA World Heavyweight Championship, “The Blueprint Matt Morgan, was one of the featured guests on this week’s live edition (11/29/10) of the award-winning Monday Night Mayhem. You can feel the “MNM Fall Tour ’10” every Monday evening (at 7PM ET/6PM CT), exclusively on The Monday Night Mayhem Radio Network (www.MondayNightMayhem.com).
Matt joined The Big Mosh & “The Chairman of the Board” Todd Vincent for his return to “Your Home of Wrestling Radio,” which is now available in Windows Streaming Media or via the official MNM Podcast on iTunes:

More is contained in Matt’s return to The Monday Night Mayhem Radio Network, including his candid thoughts & comments on the energy and vibe that he has taken from the fans (and away from Jeff Hardy) from around the world leading into what could be the biggest night in his professional career, what he took out of working with Fortune that he feels he can use as ammunition against them going forward, the most profound lesson he took from the Tough Enough experience that he still applies to his career in TNA today, plus much more! Interact with the #1 contender for the TNA World Title Twitter right now on Twitter (at www.Twitter.com/TNAMattMorgan). Tune in to Spike TV this Thursday night for TNA iMPACT (beginning at 9PM ET/8PM CT) to see “The Blueprint” go one-on-one with “The War Machine” Rhino this Thursday night on Spike TV, and be sure to call your local cable or satellite provider for TNA’s Final Resolution Pay-Per-View (headlined by “The Charismatic Enigma” Jeff Hardy defending the TNA World Heavyweight Championship against Matt Morgan). Follow “Your Home of Wrestling Radio” on Twitter (at www.Twitter.com/FeelTheMayhem), and join The Big Mosh & “The Chairman of the Board” Todd Vincent this Sunday night (beginning at 8PM ET/7PM CT) for live coverage & analysis of Final Resolution!