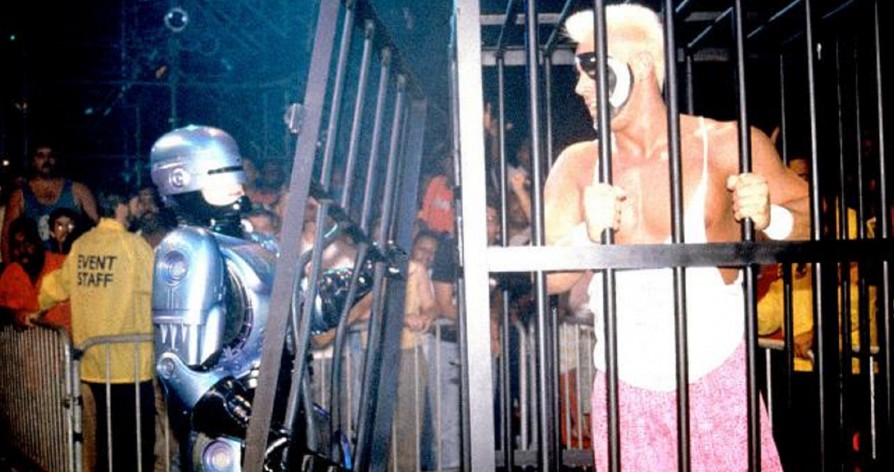 “You can call this the new world order of wrestling, brother” … Who can ever forget Bash at the Beach 1996 when Hulk Hogan turned his back on all of his Hulkamaniacs and introduced us all to the New World Order?

The red and yellow was a thing of the past and a new version of Hogan was unleashed upon the wrestling world. The black and white Hollywood Hogan – leader of this new wrestling faction – no longer an American hero but an American outlaw.

The nWo storyline that began during the mid-90s would last for much of the duration of World Championship Wrestling. While the concept of the nWo would eventually dwindle and be revamped time and time again, the original storyline is perhaps the greatest in professional wrestling history.

WCW began to push the envelop and do things a little differently – breaking the barriers of traditional wrestling programming. The nWo “invasion” of their product would aid WCW in the coveted ratings battle against rival promotion, WWE.

In fact, for an extended period of time, WCW would win the ratings battle on a consistent weekly basis, placing the company on top of the wrestling world. Everything was going right but in a quick instant it all went wrong.

WWE gained the upper hand and WCW began to reek of soiled desperation. The company had fallen on hard times and was soon placed on life-support. Those who stuck around to witness the last gasp – the final breath – witnessed some troubling times for WCW.

In this article, we will take a look at some of the worst ideas to have ever come out of the promotion – some preceding the legendary nWo storyline and others during the not-so-glory days. These are the top 20 most ridiculous WCW storylines:

Art imitating life? Scott Hall has long struggled with addiction and personal problems and he makes no secret of his troubled past. In 1998, when Scott Hall showed up to Monday Nitro completely intoxicated, WCW officials forced him into rehab.

Months later, Hall would return to WCW. In a new storyline, Hall would appear drunk while on television. This included bringing alcohol down to the ring and vomiting on Eric Bischoff, all the while performing in a disorderly fashion.