WWE Tribute to the Troops 2014 results 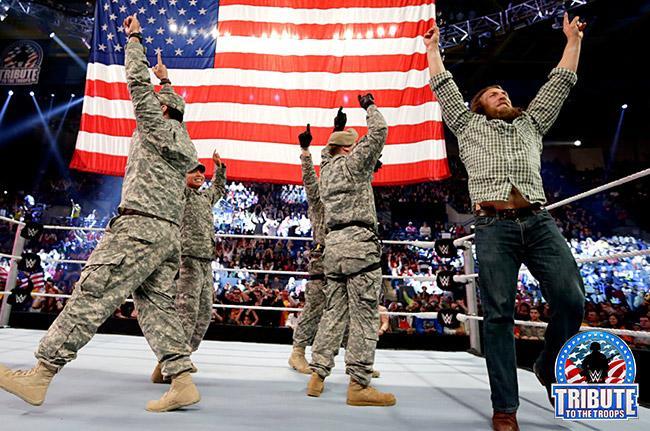 (1) The Usos defeated Stardust and Goldust. A pretty decent match, but it wasn’t anything different than the dozens of matches they’ve had together this year.

John Cena and Hulk Hogan both came out to hype Tribute to the Troops and do their pro-America deal.

(2) Naomi, Emma, and Natalya defeated Paige and the Bella Twins. This was some kind of Christmas themed match.

(3) Dean Ambrose defeated Bray Wyatt in a No Disqualification match.

(4) John Cena, Erick Rowan, WWE Intercontinental champion Dolph Ziggler and Ryback defeated Seth Rollins, Kane, Big Show and Luke Harper in a 8-man tag team match. So basically a Team Cena vs. Team Authority rematch without Mark Henry and Rusev. Hulk Hogan came out to cheer on the babyfaces, and waved around the American flag with the good guys after the match.

The show wrapped up with Florida Georgia Line doing a short concert on the stage.