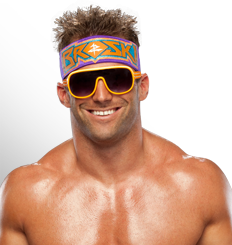 Editor’s note:  The following is an excerpt from an interview now posted on http://xfinity.comcast.net.  Zack Ryder spoke with Gordon Holmes for his TV Blog.

It was the feel-good story of 2011. In a last-ditch effort to save his job, Zack Ryder, the long-forgotten, fist-pumping bro from Long Island had turned his tiny YouTube show into an Internet sensation. He rode that wave of popularity to a thunderous ovation at the Survivor Series and a United States Title victory over Dolph Ziggler at TLC.

Then he was destroyed by Kane and dumped by Eve Torres.

But things are looking up for the self-professed “Long Island Iced Z.” At the Great American Bash a few weeks ago he made Eve look foolish and ousted Kane to win a battle royal.

I recently had a chance to sit down with the Internet’s favorite Broski at San Diego Comic Con to find out what he plans to do next, the fate of his Internet Championship, and more…

Gordon Holmes: At the Great American Bash you were finally able to get revenge on both Eve and Kane. Was it nice to finally get some closure on those issues?

Zack Ryder:  I needed that redemption big time. I was on such a roll at the end of 2011 and the beginning of 2012 and the whole Kane and Eve thing killed my momentum.  Basically killed my career. So, to turn that around and get revenge on them was something I needed. Hopefully it’ll get the Ryder Revolution back on track.