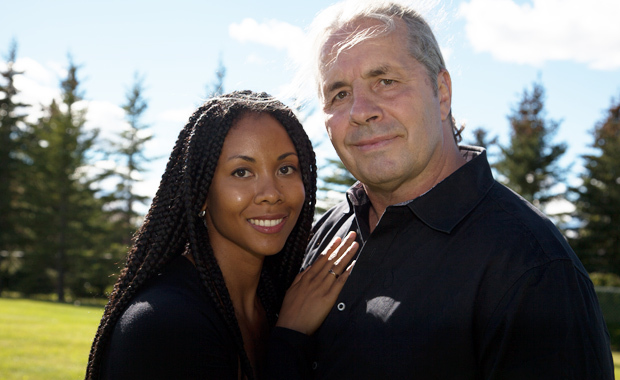 The retired Canadian pro wrestler — known across the world for being the best there is, was, or ever will be — was not going to be pinned to the mat without one hell of a fight.

The Calgary-born athlete first learned he might have prostate cancer in the fall of 2013. A routine physical included a blood test that looked at his prostate-specific antigen (PSA) levels. His elevated PSA levels led his doctor to believe he had a slow-growing type of prostate cancer. Active surveillance meant Hart would have to undergo a biopsy and have regular blood tests to track the disease’s progression.

“I never felt anything. I had no symptoms at all,” he recalls. “It was a mystery to me that there was anything wrong. ‘Devastating’ is a good word for how I felt when I received the diagnosis. I was terrified about what the future might hold. It was a hard thing to accept.”

His PSA levels continued to rise, then dropped, then rose again in the fall of 2015 to a level that caused Dr. Eric Hyndman of the Prostate Cancer Centre in Calgary to start talking about dates for the surgery to remove Hart’s prostate.

“Once it was booked for February 2016, I had five months to think about it,” Hart says. “I wanted to try and avoid it. I looked online for solutions, and even went the homeopathy route. In the end, I was painted into a corner and had to confront the situation head on.

He was fortunate to have Dr. Hyndman, one of the leading experts in prostate cancer, as his doctor. Hart has an enormous respect for him — the man who coached him through the ordeal with a combination of directness, reassurance, and honesty.

Going public about his cancer

Hart underwent a robotic prostatectomy surgery in February 2016 — a less traumatic, minimally invasive procedure that would leave more nerve endings intact. But, before he went into the hospital, Hart posted a poignant and emotional message to his fans on his Facebook page, letting them know he was in the midst of the biggest fight of his life.

“It’s a big win. Better than any title I could ever possibly get.”

“I had no intention of telling anyone,” he says. “But, as the day of my surgery neared, I knew I had to tell my sisters and my brothers about it. I thought about what I should do, then I decided I should have the courage to speak out so that maybe something good would come out of what I was going through.”

Something good did happen. Fans, old high school friends, family members, and strangers who heard about Hart’s journey went to clinics and their family doctors to get a PSA test. This news made Hart happy, because he now knows firsthand how early detection is the key to beating prostate cancer successfully.