Dutch Mantell’s newest book, Tales from a Dirt Road, is coming soon! Autographed copies of the sequel to his hit first book, The World According to Dutch, are available for preorder directly from Dutch.

DUTCH’S NEWEST BOOK….
TALES FROM A DIRT ROAD…
A COMPILATION OF WRESTLING TALES AND STORIES TAKEN FROM
THE INTERNAL HARD DRIVE OF DIRTY DUTCH…
COMING SOON!!!!
.

My newest book, TALES FROM A DIRT ROAD, is nearing completion. I want to thanks the thousands of people who have emailed me about my last book and are eagerly awaiting the next one. In this one, I have written what my instincts have told me that readers and fans want to hear. All of these stories are true and are as accurate as possible. Dates and times may be somewhat off but in reliving a life history of crazy things happening, sometimes my internal calendar includes an inaccurate date. Hey, even the Mayan calendar is saying the end of the world could be 50 years off so if the Mayans couldn’t get it right after 2.000 years, don’t expect me to.
.
TALES FROM A DIRT ROAD will be a great followup to my first book, THE WORLD ACCORDING TO DUTCH, which received much better reviews than I ever thought possible. It is written much along the same lines and is not an autobiography of my life. It is as the description above says, a compilation of tales and stories accumulated through a lifetime of traveling every major city in the US with a crazy ass bunch of pro wrestlers.
.
But to those who want to order my new book, TALES FROM A DIRT ROAD, these are just some of the chapters that will be included.
.
1. TRAVELING WITH BORDERLINE MENTAL PATIENTS… OR my beautiful time spent with my friend, Sid Vicious and the Iron Sheik as we travel middle America for a never ending 30 day loop when we all were in WCW. Note… the story ends up in an after hours bar in Knoxville, TN. at 3AM in the morning… wild story and we were lucky not to have gotten shot. Seriously.
.
2. MADISON SQUARE GARDEN SHOWDOWN… this is a story about an incident that got largely unreported at the time by all the wrestling sheets but it concerns a confrontation between the guys that I managed there, Ron and Don Harris, when they confronted a leading member of the Kliq backstage at the Garden. This did not happen inside the wrestling ring…it was in the main dressing room of the Garden. If anybody wondered why the Blu Brothers had such a short run in the WWF, this is your answer.
.
3. VINCE RUSSO BEHIND THE SCENES… here is an in depth look at a polarizing figure in the world of pro wrestling. In this chapter, you’ll find out what he was like from a personal and professional viewpoint. Can Bret Hart, Stone Cold Steve Austin, Jim Cornette, Jerry Jarrett, Hulk Hogan, Eric Bischoff and Bill Goldberg all be wrong? He’s been at the core of controversy all his life and even to this day, he still is. It’s a look at him from my viewpoint and not one that a lot of people have had. A highly recommended chapter in the book.
.
4. A WILD NIGHT IN MEXICO CITY… in this chapter, I describe my first introduction to Mexico and to Mexican wrestling. I found out that riling up fans with just an interview by pushing the right buttons works in Spanish too and I wasn’t even in the match. Good story along with the best of Dutch political thoughts.
.
5. WRESTLING IN 105 TEMPERATURES… this is a story that I lifted off my blog that I had written a year ago or so but it was so defined and humorous that I had to include it in the book. It’s a story of my rookie year in the business and how I had to find a way to navigate the political minefields of the business while at the same time, keeping a check coming in. Funny story.
.
. 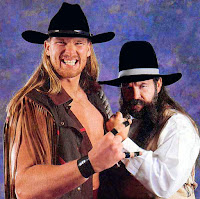 6. JOHN BRADSHAW LAYFIELD… INSANE OR GENIUS? After the Blu Brothers fiasco in the WWF, the second man I managed was Bradshaw and still today, I wonder if insanity can go unnoticed for years? With Bradshaw, its a tossup. Great chapter with some funny moments especially when we ended up in Canada in Vancouver. John should have been arrested and I should have been too…. for being stupid enough to be with him.
.
7. WRESTLEMANIA 11… my first and only WrestleMania but I document a HUGE WEEKEND in where Lawrence Taylor wrestled BamBam Bigelow and all the happenings backstage and leading up to this event. WRESTLEMANIA today is a part of Americana and for me to have appeared on it…was one of the biggest thrills I’ve ever had in the wrestling business.
.
8. A FIGHT YOU NEVER HEARD ABOUT… a story about a wild night in Tampa during the glory of original Florida Championship Wrestling in which Jack and Jerry Brisco wanted to have a word of prayer with Ernie ‘the Cat’ Ladd at 2AM in the morning in a parking lot. This was more than just a meeting, it turned into a fight. Usually, most meeting wait until the next day to happen but not this one. Needless to say, the prayer session went south but who did it go south for? Read the book.
.
9. CREATIVE MEETINGS… WTF really goes on behind the closed doors of a creative meeting? How are decisions made…and who makes those decisions? I’ve sat in on hundreds of creative meetings in Memphis, Mid-South, Florida, Puerto Rico, WCW, TNA and once in WWF and believe me…they’re all the same. I blow the lid off whatever vision people have had about the creative efforts behind the scenes. It’s a lot like government…except less productive..only the names have been changed to protect the guilty.
.
10. THE EDDIE GRAHAM STORY… this is a story circa mid 80’s, Tampa, Florida. If you don’t know who Eddie Graham was, then let me enlighten you. Eddie Graham was at one time one of the most respected wrestler and promoter in the wrestling world or he was in the United States. He committed suicide in 1985 while I was booking Florida. Here is my take on what happened and what led up to the tragedy.
.
.
DISCLAIMER: As you’ve just read above, some of the chapters in this book aren’t all funny. Unlike my last book, some of the stories I will include in the TALES FROM THE DIRT ROAD are not all funny nor humorous. It is real life by real people and the problems they go through. I have been on the edges of some of these stories and hopefully, through this book, you will see how tough life can be behind the spotlights of this wild and crazy business. There are a few serious stories in my book which underscore the lives behind the people I write about. Trust me… all these stories are TRUE and REAL… even the ones I make up.
.
PREORDER TODAY:
Be the first to have your copy of
TALES FROM A DIRT ROAD
.

Just like I did last year when we wrote my first book, I am offering a SPECIAL COLLECTOR EDITION of the book which entitles you to a personally autographed copy and for first delivery of the book. This book will not be offered on Amazon initially. This special offer is only be made available on the blog for a limited time.
.
This SPECIAL COLLECTOR EDITION will be limited to the first 250 copies and will include the following payable by PayPal and Money Order only:
.
1. A personally autographed copy of TALES FROM A DIRT ROAD, signed and dated by Dirty Dutch Mantell. Your copy will be signed as per your instructions.
.
2. A SPECIAL COLLECTOR UNIVERSITY OF DUTCH CAP and last…
.
3. A commemorative 8X10 photo of the Dutchman which will also be personally signed per your specific request.
.
THE PRICE ON THE SPECIAL COLLECTOR EDITION WILL BE 54.95 payable via PayPal or Money Order. Sorry no credit cards or personal checks accepted. If you’re interested in this offer, please email us at
.
[email protected]
for more details.
.
.
NEWS: Just wanted to thank all the great fans in and around New Jersey, New York and Philly who turned out last weekend for Legends of the Ring Roast 3, in which Jim Cornette was roasted. Great time had by all and truly, one of the best wrestling related conventions, I’ve ever attended. I want to thank the promoter of the event, James and Anthony for having me and for all the fans who turned out in record numbers. Thanks guys.
Related Items
← Previous Story Mick Foley talks about TNA & new book
Next Story → Bragging Rights a Failure