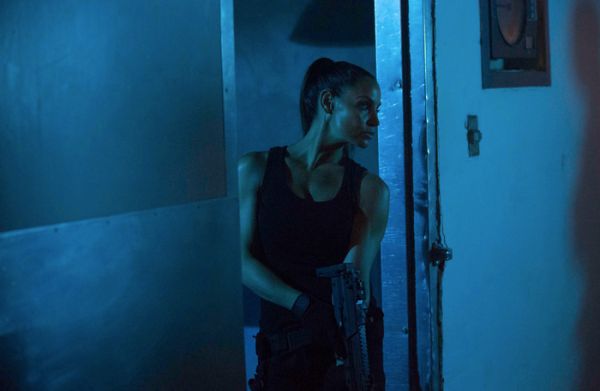 The WWE Hall of Fame ex-Diva is talking about the former during a recent phone interview. But when 1-year-old son Max makes his way into the room, she goes into giggling, blissful mom-speak, and the latter clearly takes priority.

“Whether I was wrestling, starting my own business, balancing business and baby, it’s still hectic and I love it,” Stratus explains. “That’s how I like it, it keeps me creative, keeps me inspired, which makes me the best me, which in turn makes me a better mom.”

This mom still like to scrap, showing off a fit-to-kill — literally — physique in a promotional shot for her role as a special-ops agent in the upcoming movie “Gridlocked,” co-starring Danny Glover.

But she’ll be re-connecting with her most famed former combatant, Lita, Saturday at the Masters of Ring Entertainment “Lasting Legacy: A Tribute to Women in Wrestling” event in Wilmington, N.C. The former archrivals are now “Team Bestie,” forming an outside-the-ring tag-team for life when Lita became Max’s godmother.

The personal relationship steadily grew since the pair retired, and morphed into a new opportunity when Trish inducted Lita into the WWE Hall of Fame in 2014 (a year after Trish famously announced Max’s impending arrival during her 2013 Hall acceptance speech).

“Ever since the induction, I think people have been keen on seeing us aligned because all these years they saw us fighting each other,” Trish said. “So, now the Trish fans and the Lita fans are kind of united, I guess you could say. Whereas before there were distinct sides.

“Fans really dug it, so we turned it into a little thing and booked the ‘Team Bestie Tour.’ We started our first tour last year. We hit the road and started doing conventions and signings together, and people really loved it — and so did we. I hadn’t really done the circuit in a while because I had been focusing on my business and my family, so I hadn’t had a chance to get on the road and get with the fans.”