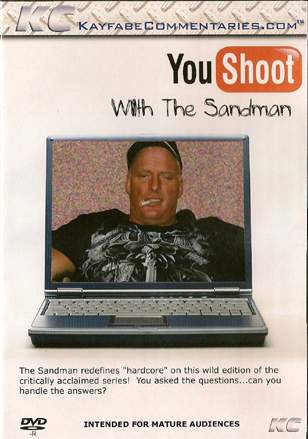 YouSHOOT with THE SANDMAN

KayfabeCommentaries.com has always strived to bring “kayfabe” back into the modern day spotlight.  The popular line of DVD’s features several unique concepts, including Guest Booker and a little something called YouSHOOT – which combines the traditional shoot interview with an interactive format incorporating questions submitted by average fans via the internet.  It ends up being no-holds-barred interrogation which forces the subject to open up like never before.

Enter James Fullington; perhaps it would be much cooler if I said “Enter Sandman,” but I don’t have the money to purchase the rights!

Watch as the empty beer cans accumulate on the coffee table, as the Sandman discusses topics such as classic ECW, rats & sex, drink & drugs, money, the new ECW, grudges, marks, gimmicks, and many more “hardcore” issues.  You can only imagine what the politically-incorrect ECW original has to say about those topics, or you could pick up the DVD and find out for yourself.  One of the most memorable moments of the DVD was Sandman’s spirited response to a 9/11 conspiracy theory question.

Despite the vulgar nature of these interviews, I usually end up becoming a bigger fan of the person being interviewed than I was before I watched.  I was really impressed by Sandman’s honesty and willingness to go the extra mile to give the most entertaining responses.

One of the best parts about the YouSHOOT interview concept is the thrill of seeing my name on the screen and hearing the moderator and subject address me personally when the questions that I submitted are asked.  KC director Sean Oliver has no problem mentioning the name of the person asking the question, along with the website which sponsored the question.  A lot of companies don’t understand the concept of cross promoting, so I respect Sean and the KC staff for acknowledging those who support the process.

You can look high and low, but I doubt you will find very many negative reviews for any of the Kayfabe Commentaries DVD’s – including YouShoot’s with Honky Tonk Man and Missy Hyatt, as well as Guest Booker’s with Kevin Sullivan, Gabe Sapolsky, JJ Dillon, Raven, and Gary Hart.  They pretty much have a 100% success rate, so how can you lose?