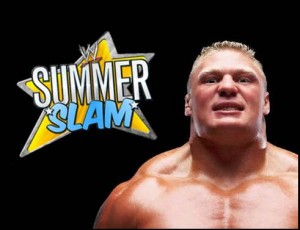 As Brock Lesnar gets ready to make an appearance on Raw’s history making 1000th episode on July 23rd.WWE prepares for an epic clash between Brock Lesnar and WWE’s onscreen Chief Operating Officer, Triple H, at the biggest event of the summer, SummerSlam. But when Brock Lesnar returned to WWE the night after Wrestlemania, Many could not remember who Brock Lesnar was, and those that did, had long forgotten many of the things Brock had done in WWE to make him as popular has what is still remains today.

Brock Lesnar was born, Brock Edward Lesnar on July 12th, 1977, inWebster,South Dakota, where he attendedWebsterHigh School. In his senior year Brock compiled a record of 33 wins, 0 losses and 0 draws. This would explain him studying at theUniversity ofMinnesota on a full Wrestling Scholarship. As fate would have it Brock would be roommates with Shelton Benjamin, a man he would work with later on in time in WWE.

After leaving college in 2000, Brock’s incredible background in wrestling saw him getting signed to WWE (World Wrestling Federation at the time). WWE sent Brock to Ohio Valley Wrestling (OVW), which at the time served as WWE’s main developmental territory. It would be in OVW that Brock would once again be with Shelton Benjamin, as they formed a tag team

Brock made his first impact in WWE the night after Wrestlemania 18, when he came through the crowd with Paul Heyman, who would act as his agent for a long time to come. Brock attacked Al Snow, Maven and Spike Dudley. It was clear, Brock Lesnar meant business.

Brock would start his WWE career by feuding with the Hardy Boyz, they would have a few matches which were set out to build Brock Lesnar as a monster of a main event superstar. Later that year Brock Lesnar would win the prestigious WWE King of the Ring Tournament and earn a title match at SummerSlam.

During the period between SummerSlam and the previous event, King of the Ring, Brock would make the switch to the “blue team”, SmackDown. He would have a short rivalry with Hulk Hogan. Hogan being a legend in our sport and being a huge part of putting professional wrestling on the map was a fine choice to help establish Brock Lesnar heading to his title match with The Rock at SummerSlam 2002.

At the 2002 SummerSlam, Brock Lesnar would make history by becoming the youngest WWE Champion in history (at age 25). This record previously belonged to the man he defeated for the title on that night, The Rock. Brock had become the biggest thing in wrestling.

As Brock became a bigger and bigger star, one thing became inevitable, a feud with the biggest star wrestling has ever had, The Undertaker. The two men would battle at the No Mercy pay-per-view inside Undertaker’s demonic Hell in a Cell match. In a shocking twist, Brock retained the title.

Could anybody stop Lesnar? Well, if anybody could, it would be the world’s largest athlete, the Big Show. He would be Brock’s next challenger, and despite the warnings of manager, Paul Heyman, Brock went ahead with the match. It would turnout to be a big mistake, as Brock would suffer his first pinfall loss since entering the WWE. This occurred after Paul Heyman turned his back on Brock Lesnar and assisted The Big Show into picking up the victory.

Following the incidents from Survivor Series, Heyman would deny Lesnar a rematch for the title. At the following pay-per-view, Brock would get a measure of revenge when he cost The Big Show the WWE Championship to Kurt Angle. This would lead into Angle enlisting the services of Paul Heyman, who again refused Brock Lesnar a title match.

A frustrated Brock Lesnar would take out his rage on Kurt Angle, breaking the leg of the champion. While Kurt was recovering from the injury, Brock would come face to face with Big Show again. This time it would be at the Royal Rumble, where the two squared off for entry into the Royal Rumble match. Brock would get the win and earn his way into the Rumble match. Which Brock would win and earn a title shot at Wrestlemania XIX.

This would lead to a rivalry between Brock Lesnar and Kurt Angle. The two would meet at Wrestlemania XIX with the WWE Championship up for grabs. In a match worthy of the grand stage of Wrestlemania both men gave it their all. In the closing moments of the match, fans would see something they were unaccustomed to seeing. Brock Lesnar made his way to the top rope and delivered a Shooting Star Press. Unfortunately for Lesnar, he did not connect properly on the move and as a result suffered a severe concussion.

Lesnar and Angle would continue their rivalry through the summer, leading into a match at SummerSlam. When Kurt made Brock tap out, Brock became upset and would start to wreak havoc on the smaller superstars of SmackDown.

Brock would get a title match with Kurt Angle on SmackDown that September. The match was a 60 minute iron man match. After some cheap tactics in the early part of the match, Brock would come back to pick up the win and become the WWE Champion yet again. The match is still considered as one of the best in the history of SmackDown. This would be Brock’s third and final run with the title.

During this last title reign, Brock would face “The Deadman”, The Undertaker, in a Biker Chain match at the No Mercy event. When Mr. McMahon got involved Brock was able to hang onto the title and his reign continued.

After the No Mercy pay-per-view, Paul Heyman was appointed as the General Manager of SmackDown, replacing a fired Stephanie McMahon. Lesnar would find himself once more aligned with Heyman and would take to the Survivor Series event in a traditional 10 man elimination tag team match. This would be the second time that Brock was ever made to tap when the late, Chris Benoit locked in the deadly crippler crossface.

2004 Started off with Brock defending the WWE Championship against the man who he had taken out with a broken neck, Hardcore Holly. Brock managed to once more retain the WWE title.

Back at the Survivor Series in 2003, Brock Lesnar would first come face to face with Goldberg. Goldberg was a member of Monday Night Raw, and the two brands only clashed at the major events: Royal Rumble, Wrestlemania, SummerSlam and Survivor Series. The two would come face to face once more at the 2004 Royal Rumble, when Brock interjected himself into an interview with Goldberg. He reminded Goldberg, who was entered into the Royal Rumble match, of the fact that at Survivor Series they had both held titles and that Goldberg was no longer the World Heavyweight Champion.

The confrontation between the two men would reach a boiling point when Brock interfered in the Rumble match and cost Goldberg the opportunity to go to the main event of Wrestlemania.

However, Brock’s luck would run out the following month at SmackDown’s No Way Out event inSan Francisco,CA. It was a significant loss as Brock dropped the belt to WWE Hall of Famer, the late, Eddie Guerrero, who suddenly passed away two years later. This was as a result of the interference of Goldberg, who was repaying the favor Brock had given him a month prior.

The two were set to meet in a match at the largest event of the year, Wrestlemania. WWE Hall of Famer, Stone Cold Steve Austin was appointed as the special referee for the match. But when rumors surfaced that both men were leaving the company following their Wrestlemania clash, fans lost interest and the match lost the hype it had gathered months prior.

Following the match with Goldberg, Brock would try out for the NFL, but Brock became a late cut, after only playing in the preseason. Lesnar decided to go over toJapanand joined New Japan Pro Wrestling (NJPW), where he would capture the IWGP Heavyweight Championship, something only a few American wrestlers have ever achieved.

In 2007 Lesnar joined K-1 Hero’s Las VegasMMApromotion, where he would be until 2008. It was in 2008 that the announcement came that Lesnar had joined Ultimate Fighting Championship (UFC). Lesnar made quite the impression in the early part of hisUFCcareer. But by the time Brock announced his retirement from the company and the sport, he had gathered a resume of 8 wins, 3 loses and no draws.

Rumors surfaced that Brock would be returning to WWE, but for a few months following Brock’s retirement from mixed martial arts, Lesnar had not been seen in WWE. This all changed onApril 2, 2012during Monday Night Raw. Lesnar returned to attack John Cena who had lost to The Rock the night before at Wrestlemania. This led the two men into a match at Extreme Rules. John Cena picked up the win in a very physical encounter.

Unhappy with demands Lesnar had been granted by General Manager, John Laurinaitis, Triple H came out to address Brock and inform him that they would be working according to the initial contract WWE had presented to Brock. Triple H claimed that it was a fair contract and that Lesnar would get everything that he deserved from it. Brock clearly disagreed with the Game, and attacked Triple H, using the Kimura lock. Triple H would sport a broken arm as a result of this attack. Paul Heyman once more surfaced as Brock’s legal representation and informed the WWE and the WWE Universe that Lesnar had quit the company and would be filing a lawsuit against the company for breach of contract. After Triple H put his hands on Paul Heyman, Heyman added one for assault as well.

At No Way Out on June 17th, Triple H would return to WWE to challenge Brock to a fight at SummerSlam in August. Heyman however refused, and reminded Triple H of the lawsuits. Triple H made statements which put Lesnar’s manliness into question. This prompted Heyman to inform the game that Lesnar would be at the historic 1000th edition of Monday Night Raw on July 23rd to address Triple H and make his final decision as to weather or not he will face Triple H at SummerSlam.

Lesnar’s career with WWE might not have spanned for a long time, but the impact he made has left a long effect on the wrestling world. Now the WWE Universe await a heated rivalry explode at the 25th Anniversary of SummerSlam on August 19th.