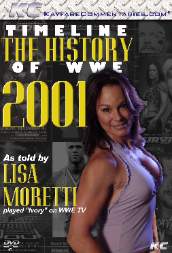 We’re about six episode deep into the “Timeline” series of DVD’s produced our good friends over at Kayfabe Commentaries. So far they have covered 1977-78 (Billy Graham), 1983 (Don Muraco), 1987 (Honky Tonk Man), 1988 (Hacksaw Jim Duggan), and 2000 (Rikishi). Now it is time to talk about the most politically charged year in WWE History – 2001. It was the year Vince McMahon purchased WCW and all hell broke loose in the world of professional wrestling. KC director Sean Oliver enlisted the services of the lovely Lisa Moretti, who wrestled as “Ivory” for many years in the WWE, to help run down the highlights of the year. She broke her silence after many years away from wrestling, and I sure am glad she did!

The first thing I want to say is how much of an Ivory mark I was, am, and always will be. She still looks absolutely stunning after all these years. Actually she looks better than ever as she enters her 50th year on this earth. She did a great job dishing out the dirt about people associated with the WWE in 2001, getting some good stuff in without being too nasty. I’d have to say this was one of the better episodes of Timeline so far, and any wrestling fan would be thoroughly entertained by this trip down memory lane.

Check out the growing collection of DVD’s at www.KayfabeCommentaries.com