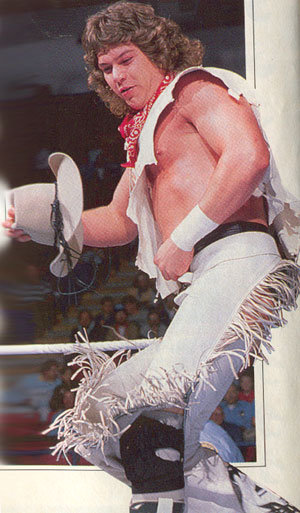 It was also in 1985 that Houston and Dick Murdoch squared off in what is probably one of the shortest matches in professional wrestling’s history. Murdoch pinned Houston in less than two minutes with a one shot punch as Houston attempted a headlock. By the end of 1985 Houston began a feud with Krusher Krushchev for the Mid Atlantic belt. In January 1986 Houston won the belt defeating Krushchev but subsequently lost it to Black Bart. By the end of 1986 Houston formed a tag team with Nelson Royal and ventured to the Central States promotion where he would win the championship belt from Jerry Lawler. While there he engaged in a series of matches with Bulldog Bob Brown and Bill Dundee. Before his departure from the NWA Houston had began dating Tully Blanchard’s valet Baby Doll. The two married in 1987 and she too would leave with him. Also this was around the time he began a brief run in the Von Erich’s World Class Championship Wrestling.

By the end of 1987 he debuted in the World Wrestling Federation (WWF). At the same time Baby Doll was attempting to reenter the NWA/WCW and following a brief stint was terminated. It was widely believed that the NWA brass saw Houston working for a rival promotion as a conflict of interest. After 1988, Houston and Baby Doll toured the independent route before he showed up in the now defunct Global Wrestling Federation in 1992 wearing a masked and calling himself The Midnight Rider.

In 1994 Baby Doll would divorce Houston, describing her reasons, she said “Sam wanted to be the life of the party”. Following the destruction experienced by his father following the aftermath of Hurricane Katrina, matters worsened when it was revealed that Houston was a multiple DUI offender and because of his father’s notoriety had avoided stiff penalties. In 2005 after repeated DUIs Houston was sentenced to ten years in prison.